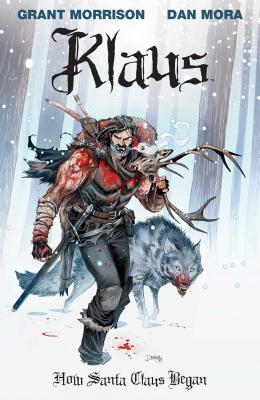 He’s a myth. He’s a legend. He’s loved worldwide by children and adults alike...but does anyone truly know the origins of Santa Claus? Set in a dark fantastic past of myth and magic, Klaus tells the story of how Santa Claus really came to be—the tale of one man and his wolf against a totalitarian state and the ancient evil that sustains it.

Award-winning author Grant Morrison (All-Star Superman, Happy!) and Eisner Award-nominated illustrator Dan Mora (Go Go Power Rangers, Hexed) revamp, reinvent, and reimagine a classic superhero for the 21st century, drawing on Santa’s roots in Viking lore and Siberian shamanism, and taking in the creepier side of Christmas with characters like the sinister Krampus. Klaus is “Santa Claus: Year One” and finally answers the burning question: what does Santa Claus do on the other 364 days a year?
Grant Morrison, MBE is a Scottish comic book writer and playwright. They are known for their nonlinear narratives and countercultural leanings in their runs on titles including DC Comics's Animal Man, Doom Patrol, Batman, JLA, Action Comics, All-Star Superman, Green Lantern, The Flash, Vertigo's The Invisibles, and Fleetway's 2000 AD. They have also served as the editor-in-chief of Heavy Metal and currently operate as an adviser for the magazine. They are the co-creator of the Syfy TV series Happy! starring Christopher Meloni and Patton Oswalt. Morrison is also an occasional actor, with their most recent appearance being a brief cameo as a news broadcaster in the 2017 horror comedy film Mom and Dad, which starred Nicolas Cage and Selma Blair.