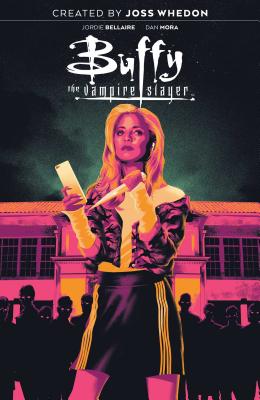 Go back to the beginning as the critically acclaimed pop culture phenomenon Buffy The Vampire Slayer is reimagined under the guidance of series creator Joss Whedon!

This is the Buffy Summers you know, who wants what every average teenager wants: friends at her new school, decent grades, and to escape her imposed destiny as the next in a long line of vampire slayers tasked with defeating the forces of evil...only this time around, her world looks a lot more like the one outside your window.

Eisner Award winner Jordie Bellaire (Redlands) and Russ Manning Award winner Dan Mora (Go Go Power Rangers, Hexed), along with series creator Joss Whedon (Marvel’s The Avengers), bring Buffy into a new era with new challenges, new friends, and a few enemies you might already recognize. But the more things change, the more they stay the same as the Gang faces brand-new Big Bads, and the threat lurking beneath the perfectly manicured exterior of Sunnydale High confirms what every teenager has always known: high school truly is hell.

Whedon co-wrote for the Pixar animated film Toy Story (1995) (for which he was nominated for the Academy Award for Best Original Screenplay), wrote and directed the Firefly film continuation Serenity (2005), co-wrote and directed the Internet miniseries Dr. Horrible's Sing-Along Blog (2008), and co-wrote and produced the horror comedy film The Cabin in the Woods (2012). He wrote and directed the Marvel Cinematic Universe superhero films The Avengers (2012) and its sequel Avengers: Age of Ultron (2015), and also co-wrote the script for the DC Extended Universe superhero film Justice League (2017). He also served as director for Justice League on re-shoots, replacing Zack Snyder (who retained directorial credit).

Jordie Bellaire is an American comic book colorist who lives in Ireland and works for DC, Marvel, Valiant, and Image comic book publishers. She has colored Pretty Deadly, The Manhattan Projects, Moon Knight, The Vision, Magneto, Nowhere Men, Hawkeye, Batman, among other titles.

Bellaire is credited with starting the "Comics are for everybody" initiative to make the comic book community more inclusive and compassionate.

In 2014, Bellaire was nominated for an Eisner award for best cover artist for her collaboration on The Wake with Sean Murphy. In addition, she also received a nomination for Best Coloring award for her work on various titles, which she won.