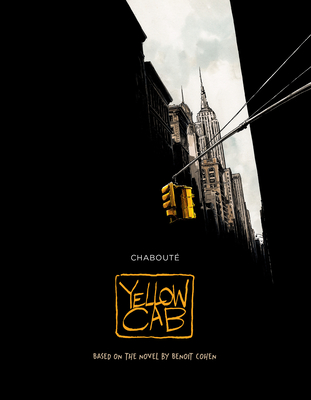 
Usually Ships in 1-5 Days
A burnt out filmmaker finds new inspiration behind the wheel of an iconic New York City taxi cab, exploring a world where he is the stranger and the city his new workplace.

After 20 years working on film and series shoots, Benoît Cohen is drained. His enthusiasm gone, a desire to stop writing and put down the camera takes over. In the city for a year, he still wonders about how best to absorb the rich diversity of the cosmopolitan metropolis, settling on a simple idea: he will become a taxi driver.

Behind the iconic Yellow Cab, behind the fantasy of freedom and independence, behind the faces of his thousands of passengers, Benoît discovers a world in which he is a stranger. First, the administrative maze that leads to the taxi driver’s license. Then the world behind the scenes. And, finally, the prejudices that surround the profession and lead the customers, cops and entire city to look at it, quite randomly, either with indifference, kindness, or aggression.

Benoît Cohen dives into his new life with the idea of turning it into a screenplay for a future film, but the material he collects from this social experiment marks him deeply, leading down unsuspected paths. The project transforms into an autobiographical novel interspersed with reflections on the creative process.

With the help of Chabouté, it is now a sensitive, deeply human graphic novel, with breathtaking illustrations that pay vibrant tribute to the most famous of American cities.

Born in 1969, Benoit Cohen is a French producer, filmmaker and writer. After studying architecture in Paris, he went to New York University to study filmmaking. When he came back to France, he started his own production company, Shadows Films. After a few short films, he directed his first feature film Caméléone in 1996.

Between 2000 and 2014, Cohen made five other feature films (Our Precious Children, If You Love Me Follow Me...), few documentaries and three TV Series. He has been working with the same actors, and the theme of life choices appears throughout his film as a major question.

Cohen's last movie, You'll Be a Man was a significant success in film festivals in the United States (more than 60 festivals and 39 awards) and is now on Netflix.

In 2014, after moving in Brooklyn, Cohen drove a cab around the five boroughs, for a few months, in the perspective of writing a screenplay about a French actress becoming a taxi driver in New York.
He wrote Yellow Cab, a book about his experience, which was published by Pointed Leaf Press. A movie adaptation of the book is scheduled to be shot in the fall of 2018.


Christophe Chabouté published his first work, Stories, based on the work of Arthur Rimbaud, in1993 in France. Since then, he has received numerous prizes for his very personal illustrationand storytelling style. When Alone, a wholly original work of his, published in France, it was widely hailed as his masterpiece and was an Official Selection at France’s prestigious Angoulême International Comics Festival. He is the illustrator-storyteller of Park Bench.
"Eisner winner Chabouté captures the restless spirit of New York City in this comics odyssey adapted from the 2018 memoirs of filmmaker Cohen. Chabouté’s wide, detailed panels and hallmark silhouetting portray the diversity of the five boroughs, with exquisitely lined architecture, subway cars, and vehicles in backdrop. It’s a truly cinematic study of the grit and glory of the city." — Publishers Weekly, starred review