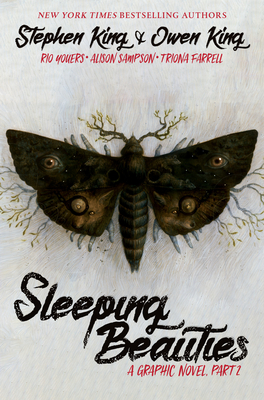 
Coming Soon - Available for Pre-Order Now
The official graphic novel adaptation of the horror novel by Stephen King and Owen King concludes in this haunting interpretation of the chilling, timely bestseller.

The mysterious plague known as Aurora has blanketed the world, and, to the men, all but a handful of sleep-deprived women seem trapped--cocooned--in seemingly endless slumber. In reality, their minds have been transported to a strange, utopic dream world. It's a world where small-town sheriff Lila Norcross and the other women can build their own society. And from which they might not want to wake.

In the real world of Dooling, West Virginia, Lila's husband, beleaguered prison psychiatrist Clint Norcross, is struggling. He's trying to protect the woman called Eve Black from the ill-thought-out actions of increasingly desperate men. But Eve, as the only woman capable of waking up, has her own plans: a test with global consequences. A test Clint will have to pass if he ever hopes to see his wife again.

Collects Sleeping Beauties issues #6-10, by writer Rio Youers (The Forgotten Girl) and artist Alison Sampson (Winnebago Graveyard), from the novel by Stephen King (The Institute, The Stand) and Owen King (Intro to Alien Invasion).
Stephen King is the author of more than fifty books, all of them worldwide bestsellers. He is the recipient of the 2014 National Medal of Arts and the 2003 National Book Foundation Medal for Distinguished Contribution to American Letters. He lives in Bangor, Maine, with his wife, novelist Tabitha King.

Owen King is the author Double Feature and co-author of the graphic novel Intro to Alien Invasion. His writing has appeared in the Boston Globe, Lady Churchill's Rosebud Wristlet, the Los Angeles Review of Books, the New York Times Book Review, One Story, and Subtropics. He is married to novelist Kelly Braffet.

Rio Youers is the author of Westlake Soul and Halcyon. His 2017 thriller, The Forgotten Girl, was a finalist for the Arthur Ellis Award for Best Crime Novel. Rio's new novel, Lola on Fire, will be released by William Morrow in February 2021.

Alison Sampson is a comic artist and architect known for her work on Genesis, with Nathan Edmondson. She's also worked for DC, Dark Horse, IDW, and Boom! and co-created Winnebago Graveyard at Image with Steve Niles.