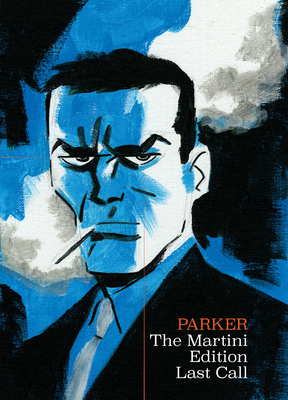 
Usually Ships in 1-5 Days
The long-awaited companion to the Award-winning Martini Edition is finally here, collecting The Score and Slayground in a beautiful oversized slipcase edition.

Darwyn Cooke crafted four universally acclaimed Parker graphic novels, adapted from the works of Richard Stark (A pseudonym for Donald Westlake), before his untimely death. This volume will be (along with the Martini Edition) the last word on Cooke's brilliant Parker stories.

This edition is a loving tribute to the legacy of Darwyn Cooke and Parker.
Richard Stark is the most famous pseudonym of world-renowned author Donald Westlake (1933-2008). In 1962 hecreated the master thief Parker and began a series of novels that have been recognized as seminal works of crime fiction. Several of Westlake's books have been adapted by Hollywood and Westlake's adaptation of The Grifters earned him an Academy Award nomination for best motion picture screenplay. Westlake has won numerous awards for his fiction and in 1993 the Mystery Writers of America named him a Grand Master, the highest honor bestowed by that prestigious society.

Darwyn Cooke (1962-2015) was a graphic designer and animator who turned his attention toward cartooning in the late nineties. Known primarily for his work on the DC line of superheroes, Cooke always had an affinity for crime fiction and has often cited the Parker books as a great source of creative inspiration. Cooke has won multiple Eisner, Harvey, and Shuster awards, as well as the National Cartoonist Society's Best Series award. In 2008 Cooke was Emmy-nominated for the animated adaptation of his magnum opus, DC: The New Frontier.
• "Cooke’s four Parker graphic novels—The Hunter, The Outfit, The Score, and Slayground stand as some of the greatest comics ever made. Presenting both The Score and Slayground together, the impressive range of Cooke’s Parker work becomes clear. It’s a tremendously impressive presentation, one worthy of the books it contains. Parker: The Martini Edition – Last Call is a very, very fine premium edition of some of the best crime comics to have ever been made. For those who dig crime comics, Cooke, Westlake, the process of comics-craft, and all of the above, tracking it down is a must." —AIPT Comics


• "If you want to read a true crime noir story, one that hooked even Ed Brubaker—these are 360 pages of amazing talent. Darwyn Cooke was a huge inspiration for Ed Brubaker. Without Darwyn Cooke, we wouldn't have Criminal. Parker is a very charismatic criminal mastermind. Darwyn Cooke was such an amazing creator. In his short time in comics, we got some great freakin' art from him. We got some great stories. This was a love project for him. This was his baby. As a matter of fact, if you go back and watch My Favorite IDW Graphic Novels, you'll see Richard Stark's Parker: The Martini Edition in there." —Near Mint Condition