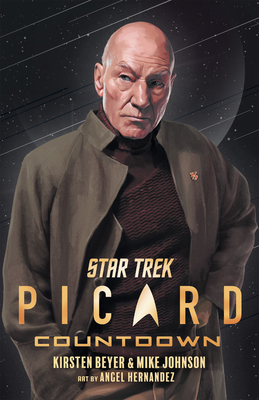 
Email or call for price
Witness the events leading to the epic series Star Trek: Picard. The Countdown starts here!

Before he retired to his vineyard, Jean-Luc Picard was the most decorated admiral in Starfleet. Then one mission changed his life forever. After discovering that a looming supernova threatens the entirety of the Romulan Empire, the Federation launches a mission of unparalleled scale. Admiral Jean-Luc Picard heads to the colony to plan the evacuation but makes a shocking discovery!

Written by Star Trek: Picard co-creator and supervising producer Kirsten Beyer and fan-favorite Mike Johnson with art by Angel Hernandez! Also contains an interview with Kirsten Beyer discussing the development and creation of the TV series and how the comic fits into its world and a special look into how the U.S.S. Verity was designed by Thomas Marrone, Lead Ship & UI Artist for Star Trek Online. Featuring cover art by Jim Salvati.
Kirsten Beyer is the New York Times-bestselling author of many Star Trek: Voyager novels, including A Pocket Full of Lies, Acts of Contrition, Protectors, The Eternal Tide, Children of the Storm, Unworthy, Full Circle, and String Theory: Fusion. She is also an actor for theater, movies, television, and commercials. She lives with her family in Los Angeles.

A highly imaginative and engaging writer who's written stories for some of the biggest characters in comic book history, including Batman and Superman, Mike Johnson has the distinction of having scripted more Star Trek comic book stories than any writer ever. Johnson's first work for IDW was in 2009, when he wrote the miniseries Star Trek: Countdown, a well-received prequel to the 2009 J.J. Abrams film. He would follow that with many more Star Trek stories, including Khan, Starfleet Academy, Nero, the crossover Star Trek/Green Lantern, and both of IDW's ongoing Star Trek series, most recently Boldly Go with artist Tony Shasteen. A lifelong Trek fan, his favorite characters are Data and Spock.
"A fantastic job of channeling the excitement for Star Trek: Picard into a story that reminds fans of what Jean-Luc Picard is all about." —ComicBook.com

"One of the most compelling stories. The joy that Picard brings to peoples lives should not go unnoticed. It feels like we've found an old friend whom we haven't had the opportunity to see in too many years. " —Reading With A Flight Ring

"If you haven't watched Picard yet, take the time to read this before you do!" —Comic Watch

"Filled with respect and devotion for the optimistic, empathetic heart of
Star Trek." —Polygon