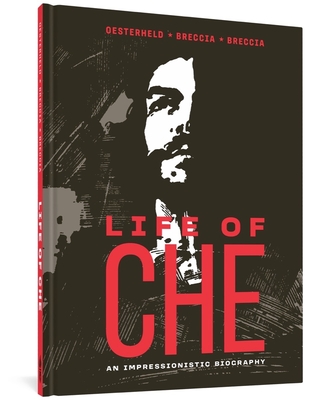 Published in 1969, this Argentine graphic biography about Ernesto "Che" Guevara was an instant bestseller. Banned by a military dictatorship, and almost lost, it has never been available in English — until now.

Life of Che is one of the most anticipated entries in Fantagraphics' The Alberto Breccia Library. Originally released as part of a graphic biography series in January 1969, it came out in Argentina only a year after Ernesto "Che" Guevara had died and reached an audience beyond comics readers. In the 1970s, the military government raided its publisher, destroying the means to reprint the book. The comic was presumed to be lost to history, until a publisher in Spain restored it in 1987. It has never been translated into English until now.

The book begins in Bolivia in 1967, then flashes back through Che's life — his childhood, his radicalizing motorcycle trip with Alberto Granado, his taking up of arms in Guatemala, his meeting with Fidel Castro, and his subsequent military and political maneuvers, ending in a fade-out to his death. Alberto Breccia and his son, Enrique, drew Life of Che. Enrique draws the Bolivia passages in a woodcut style, while Alberto depicts the flashbacks in his trademark, expressionistic black-and-white. It is primarily set in the field and with the people. Héctor Germán Oesterheld (The Eternaut) blends his authorial voice with Che's first-person. Life of Che is imbued with a sense of immediacy, as both Che and, eventually, Oesterheld would meet their ends by a military government backed by the American CIA. As Pablo Turnes writes in his afterword, it is "the testament of someone consciously marching toward his revolutionary death."

Héctor Germán Oesterheld (HGO) (born July 23, 1919; "disappeared" by the military and presumed dead 1977), was a pioneering Argentine graphic novel and comics writer. Notable works include his science-fiction series El Eternauta, as well as Life of Che, a biography of Che Guevara.

Alberto Breccia (b. 1919; Montevideo, Uruguay; d. 1993, Buenos Aires, Argentina) is an influential, internationally acclaimed comics artist and cartoonist. His career began in the 1940s, during the golden age of Argentine comics. From 1962–1964, he drew Mort Cinder, written by Héctor Germán Oesterheld, which is considered a masterpiece of the form. He took a break from comics to teach and co-found the interdisciplinary art school IDA (Instituto de directores de Arte) but returned in 1968 to draw graphic biographies of Che Guevara and Eva Perón, and a reboot of Oesterheld’s seminal 1959 graphic novel, The Eternaut. Throughout the 1970s and early 1980s — when Argentina suffered under a series of military dictatorships — and beyond, Breccia drew serialized comics for the European market, working with and adapting writers such as Poe, Lovecraft, Borges, Trillo, Sasturain, and many others. In 2021, he was inducted into the Will Eisner Hall of Fame.

Enrique Breccia (b. 1945, Buenos Aires) is a politically active Argentine cartoonist, best known to American audiences for his Swamp Thing run for DC’s Vertigo imprint. In addition to DC, he has worked for Marvel, Fleetway, Delcourt, and many other global comics publishers; he has also adapted literary works by Lovecraft, Melville, and others. His career began in 1968, when he assisted his father, Alberto Breccia, on the bestselling graphic biography Life of Che. Other notable projects include his art for the Alvar Mayor character (written by Carlos Trillo), and The Sentinels series with Xavier Dorison. Breccia currently lives in Italy.

Erica Mena is a Puerto Rican poet, translator, and book artist, who holds an MFA in poetry from Brown University and an MFA in literary translation from the University of Iowa. Their English translation of the Argentine graphic novel The Eternaut won a 2016 Eisner Award.
A 50-year-old graphic biography of Che Guevara that still feels fresh.
— The New York Times

A mesmerizing historical comic with a storied past.
— Kirkus Reviews

Breccia’s intense chiaroscuro and use of collage conjure a gritty and visceral setting that amplifies Guevara’s exploits, with occasional, effectively jarring ink-splatterings of blood
— Publishers Weekly

Breccia’s panels are revolutionary in their combination of precision and expressionistic energy.
— PopMatters

The art is moody and dark and sets the perfect tone for the story. ... The book is a must-read not only for fans of Che's movement and message, but for anyone looking to see how a great story is told.
— Under the Radar

The story of this book is almost as extraordinary as the story of Che Guevara’s life.
— New York Journal of Books