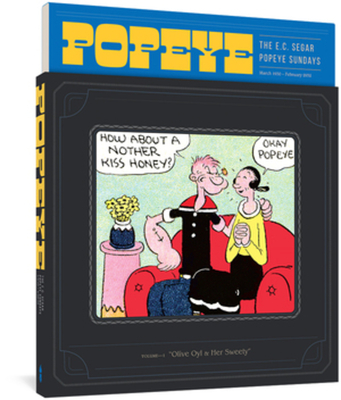 Well, blow me down! This new four-volume series collects the complete run of the original Popeye Sunday newspaper page adventures in an accessible and affordable slipcased paperback format!

An irresistible alchemy of screwball comedy, tender romance, and rags-to-riches fantasy, Elsie Crisler Segar's newspaper comic strip captivated readers of the Roaring Twenties and beyond. And Popeye, the sailor man, was the unlikely star of the show. Fantagraphics is thrilled to bring Segar's whimsical world back into print, reviving the origins of the beloved spinach-eating American icon for a whole new readership. The E.C. Segar Popeye Sundays series collects the complete Popeye Sunday stories in four gorgeous full-color volumes, each packaged in a deluxe die-cut vertical slipcase.

Volume one (1931-1932) highlights Popeye's riotous romance with his sweet patootie, Olive Oyl. As apt to hold hands as butt heads, they are ultimately meant for each other, and their enduring connection forms the warm heart of the comic. Outside the love nest, Popeye seeks fame and fortune as a prizefighter. Ever the under-dog, he must contend with a series of increasingly fearsome opponents, from the formidable Johnny Brawn to a literal gorilla!

E.C. Segar (1894-1938), creator of Popeye, is a member of the Will Eisner Awards Hall of Fame. He was born in Chester, IL in 1894 and passed away in his longtime home of Santa Monica, CA. The National Cartoonists Society created the Elzie Segar Award in his honor, which was awarded annually to a cartoonist who has made a unique and outstanding contribution to the profession.

Sergio Ponchione is an internationally recognized cartoonist from Italy. He won the Gran Guinigi Award at the 2009 Lucca Comics Festival and the Attilio Micheluzzi Award at the 2012 Napoli Comicon. Since 2005, he has taught at the Cartoon School of Asti, his hometown.

Cathy Malkasian is an animation director and cartoonist. Her credits include Rugrats, The Wild Thornberrys film (for which she received a British Academy Award nomination), and most recently, over 20 episodes of Curious George for PBS since 2008. Fantagraphics has released several of her graphic novels including Percy Gloom (2007), Temperance (2010), Eartha (2017), and NoBody Likes You, Greta Grump (2021).
An essential volume of both graphic storytelling and early 20th-century art. ... Nearly every episode collected here reveals Segar to be an absurdly hilarious master draftsman and wildly entertaining storyteller.
— Library Journal (Starred Review)

One of the great geniuses of the comic strip form, E. C. Segar created work that represents some of America's finest art in its epic scale, colloquial language, daffy humor and themes of romance and commerce.… Not to be missed.
— Time Magazine

Just as Charles Dickens took advantage of the serial publication of his early novels to introduce new characters and change directions, so also did Segar add, subtract and tinker until he had his comic strip working at its peak — and a brilliant, witty peak it was.
— The Washington Post

Modern audiences who know Popeye and his supporting cast only through later animated cartoons will be surprised by the richness of his original incarnation.
— Booklist

This new volume is perfect for a classic cartoon fan. Its focus on relatable themes like love, romance, commerce, and daffy humor make it a series readers should not miss.
— Screen Rant

It was here that the Popeye/Olive Oyl modern romance began: a series of encounters full of bile, intransigence, repressed hostility, jealousy, mind games and passion which usually ended in raised voices and scintillating cartoon violence — and they are still as riotously funny now as then.