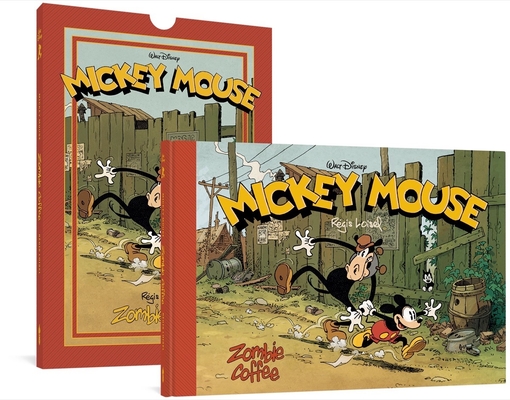 Mickey, Minnie, Donald Duck, Horace Horsecollar, and Clarabelle Cow go camping to forget the Great Depression. But when they return to Mouseton, they find shady real-estate developer Rock Fuller destroying it to build a golf course… with the help of an army of "zombies," transformed from normal citizens with a magic drink! What does Mickey's old enemy Pegleg Pete have to do with this evil scheme… and can Mickey trip it up?

Famed French cartoonist Régis Loisel won the Angouleme International Comics Festival's Grand Prize in 2006, and has been nominated in other years for numerous projects. Loisel has also worked as a Disney animator and was thrilled to produce this stellar tribute!

Zombie Coffee is told in the daily-comic-strip-serial style of Disney legend Floyd Gottfredson's beloved early Mickey adventures — packed with action, laughs, and magnificent details that explode off the pages! This deluxe edition is a landscape-formatted hardcover that comes in a portrait-formatted slipcase — and so the buyer can shelve it vertically but read it in its full cinemascope-style glory!

Régis Loisel is a cartoonist living in Montreal, Canada. Since the 1970s Loisel has become one of the most decorated French comic artists, especially in the fantasy genre. Loisel has won several awards at the Angouleme International Comics Festival, including the lauded Grand Prix in 2002.

David Gerstein is an animation and comics researcher, writer, and editor best known for his work with The Walt Disney Company and its licensees. His published projects include Uncle Scrooge and Donald Duck: The Don Rosa Library (Fantagraphics, 2014-2018) and Mickey Mouse: The Ultimate History (with J.B. Kaufman; Taschen, 2018). He lives in North Carolina.
Colorful, gorgeous art. Régis Loisel did an amazing job of giving this new story a nostalgic early Mickey Mouse comics feel.
— Duck Talks