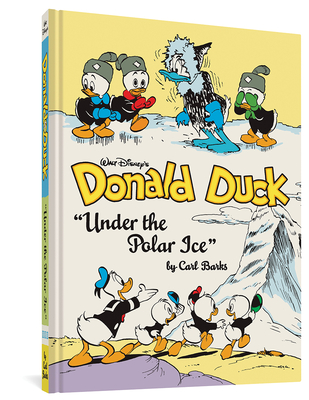 In this collection of internationally acclaimed Donald Duck comics, Donald and the nephews are stranded in the Arctic and face peril in the jungle!

In this collection of classic comic book stories, Huey, Dewey, and Louie earn a trip to the North Pole in a submarine — and Donald stows away! Fortunately, when they find themselves stranded, Gyro Gearloose invents a flying sled! Then, when Donald announces that he's taking the nephews to South America, he pledges to protect them from all the dangers in "the wildest part of the jungle" — including a sheer mountain cliff, a raging river, and a swarm of crocodiles. But who is saving whom? This book has 170 pages of story and art, each meticulously restored and newly colored, as well as insightful story notes by an international panel of Barks experts.

Enormously well-crafted and equally enormously entertaining, timeless comedy adventures … the perfect gift for just about any reader of comics, regardless of age, background, or experience.
— School Library Journal

Barks’s stories are fables rather than allegories; they aren’t set in our world, nor do they represent it. Instead, they resolutely carve out their own unique sea-space in the ocean of story.
— The Los Angeles Review of Books