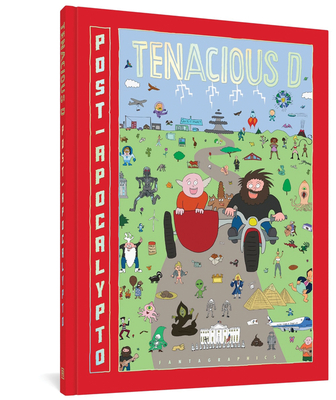 In the fall of 2018, the Greatest Band in the World - Tenacious D (comprised of Jack Black and Kyle Gass)  - added arguably its most crucial work to an already scintillating catalogue of rock greatness: Tenacious D in Post-Apocalypto the movie (available on YouTube) and Post-Apocalypto the album. And now - with great excitement - Tenacious D will add the final piece to the Post-Apocalypto universe: the graphic novel, which Jack Black drew and Kyle Gass wrote, complete with accompanied audio. Post-Apocalypto finds Tenacious D thrust into a world of complete and utter destruction following the drop of an atomic bomb. Surviving the attack in classic cinematic fashion (a good old imperishable 1950s refrigerator), the duo quickly learn that new forms of evil have spawned from the blast. One thing becomes apparent - for humanity to prevail, Tenacious D must save the world. With unimaginable twists and turns, an insane visit to the White House, a time machine, a space adventure, and the help of some tried-and-true daddy issues, Post-Apocalypto is as hilarious as it is political, and as brilliant and multi-faceted as its incredible creators.

Jack Black and Kyle Gass make up the Greatest Band in the World: Tenacious D. They started playing together in Kyle’s studio apartment on Cochran Ave in Los Angeles. No one could have ever dreamed of where the band's genius would take them, but take them it did... The band had a variety series on HBO that aired in 1999. Their self-titled album was released in the fall of 2001 with Epic Records and was quickly certified at Gold-selling status, and has since been certified Platinum. The duo completed their first feature film together - Tenacious D in the Pick of Destiny - for New Line Cinema, which was released in November 2006. The album Rize of the Fenix followed in 2012, receiving a Grammy nomination for Best Comedy Album. In 2013, Black and Gass founded and hosted Festival Supreme, a music and comedy festival in Los Angeles, CA. In its first four years, Festival Supreme boasted acts such as Adam Sandler, Sarah Silverman, Flight of the Conchords, "Weird Al" Yankovic, Patton Oswalt, Die Antwoord, Amy Poehler, Workaholics, and many more. In 2014, Tenacious D won a Grammy in the category of Best Metal Performance for their cover of Ronnie James Dio's "The Last In Line." On November 2, 2018, Tenacious D released Tenacious D in Post-Apocalypto – an animated film, with each frame hand-drawn by Black and every character voiced by Black and Gass.  Alongside the film, the band also dropped the album Post-Apocalypto. Together, they created a genius addition to the D's already scintillating catalogue of rock greatness.

Jack Black is an actor, a comedian, and a musician. He has been nominated twice for the Golden Globe awards, and he is the lead vocalist of the rock duo Tenacious D. Black lives in Santa Monica, California.

Kyle Gass was born in Walnut Creek, California. He is an actor and a musician, best known for being half of the comedy rock duo Tenacious D, along with Jack Black.
This raunchy sugar-high of a graphic novel captures the fun side of life after an atom bomb attack: things will be weird, but they will also rock. ... a self-consciously juvenile lark, best read while playing Tenacious D at 11.
— Publishers Weekly

A funny and surprisingly heartfelt ode to friendship delivered with the manic energy of artists excited to transgress.
— Library Journal

Whilst silly, crude and rude, there is something magical about Post Apocalypto.