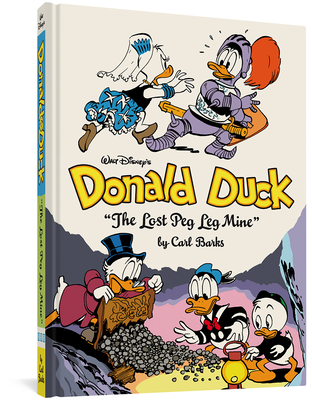 This is book number 18 in the The Complete Carl Barks Disney Library series.

In this collection of the internationally beloved comics, there’s a spooky lost mine, a runaway train, and a trip to the stars!

In our title story, Uncle Scrooge, Donald, and the nephews are hot on the trail of a pair of old saddlebags filled with gold nuggets.  Then, Donald dons a suit of armor with a rubber sword for a costume party, but he embarrasses Daisy and becomes the object of scorn and ridicule — until a pair of lions break free! And when Gyro Gearloose invents a virtual reality headset, Donald and the boys find themselves menaced by fearsome creatures on other worlds. Carl Barks delivers another superb collection of imaginative exuberance, high-concept hijinks, and all-around cartooning brilliance.

A perfect introduction to one of the greatest all-ages comics artists of all time.
— NPR.org

I consider [Carl Barks’s comics] to be the best form of storytelling I’ve read.
— Jeff Kinney