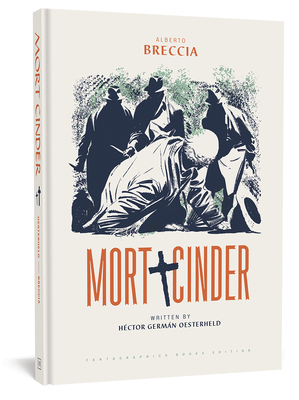 This serial follows the wanderings through time, space, and the darkest corners of humanity—from ancient Greece to the mid-20th century—of a man who rises from the grave each time he is killed.

Alberto Breccia is recognized as one of the greatest international cartoonists in the history of comics and Mort Cinder is considered one of his finest achievements. Created in collaboration with the Argentine writer Héctor Germán Oesterheld, best known in the U.S. for his politically incendiary sci-fi masterpiece, the Eisner Award-winning The Eternaut, Mort Cinder is a horror story with political overtones. This episodic serial, written and drawn between 1962–1964, is drawn by Breccia in moody chiaroscuro. The artist’s rubbery, expressionistic faces capture every glint in the eyes of the grave robbers, sailors, and slaves that populate these stories; while the slash of stripes of prisoners’ uniforms, the trapeziums of Babylon, and more create distinct and evocative milieus.

Alberto Breccia (b. 1919; Montevideo, Uruguay; d. 1993, Buenos Aires, Argentina) is an influential, internationally acclaimed comics artist and cartoonist. His career began in the 1940s, during the golden age of Argentine comics. From 1962–1964, he drew Mort Cinder, written by Héctor Germán Oesterheld, which is considered a masterpiece of the form. He took a break from comics to teach and co-found the interdisciplinary art school IDA (Instituto de directores de Arte) but returned in 1968 to draw graphic biographies of Che Guevara and Eva Perón, and a reboot of Oesterheld’s seminal 1959 graphic novel, The Eternaut. Throughout the 1970s and early 1980s — when Argentina suffered under a series of military dictatorships — and beyond, Breccia drew serialized comics for the European market, working with and adapting writers such as Poe, Lovecraft, Borges, Trillo, Sasturain, and many others. In 2021, he was inducted into the Will Eisner Hall of Fame.

Héctor Germán Oesterheld (HGO) (born July 23, 1919; "disappeared" by the military and presumed dead 1977), was a pioneering Argentine graphic novel and comics writer. Notable works include his science-fiction series El Eternauta, as well as Life of Che, a biography of Che Guevara.

Mort Cinder is a pioneer of the macabre. ... Breccia's ready to match any genre [writer] Oesterheld throws at him — suspense, historical adventure, horror, even science fiction — with a sincere and unpretentious mastery.

The Mort Cinder stories are moody genre fiction parables written with great intelligence by Héctor Germán Oesterheld and evocatively illustrated by Alberto Breccia, who employs lines that seem placed with both careful precision and fervid instinct.