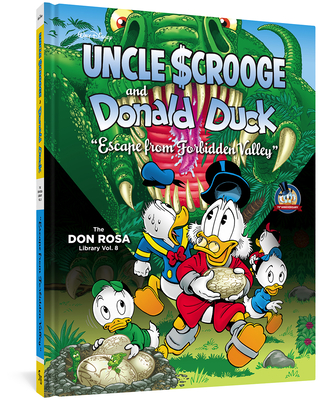 This is book number 8 in the The Don Rosa Library series.

In search of rare Amazonian nutmegs, Scrooge and Donald approach deadly Forbidden Valley... a lost world of live dinosaurs whom Donald once stampeded! Now the long-suffering locals get revenge by throwing Donald in with the dinos — and only Scrooge can save himl!  In “The Quest for Kalevala,” Scrooge, Gyro, and Magica De Spell hunt for a legendary gold-making machine... and in “The Black Knight,” master thief Arpin Lusene arrives to rob Scrooge’s money bin — or destroy it!

First active in comics as the indie creator of Captain Kentucky and The Pertwillaby Papers, Don Rosa (b. June 29, 1951) made his jump to official Scrooge sagas with the launch of Gladstone Publishing, the watershed 1980s publisher of fan-friendly Disney comics titles. Rosa later switched to producing Duckburg comics for the pan-European publisher Egmont, leading to his capturing a remarkable international fandom. He lives near Louisville, KY.

David Gerstein is an animation and comics researcher, writer, and editor best known for his work with The Walt Disney Company and its licensees. His published projects include Uncle Scrooge and Donald Duck: The Don Rosa Library (Fantagraphics, 2014-2018) and Mickey Mouse: The Ultimate History (with J.B. Kaufman; Taschen, 2018). He lives in North Carolina.