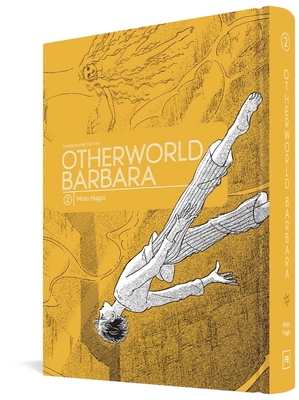 In the conclusion of the shojo manga pioneer’s sci-fi mystery, a man tries to save his son before the world ends...but which world, and which son?

In the second (and concluding) volume, Nanami had sworn to never see her granddaughter, Aoba, again. A despairing Kiriya had rejected his father, Tokio. Yet now both are traveling with Tokio to Engaru, where Aoba has slept and dreamt of the island of Barbara for seven years. The poltergeist phenomena becomes more intense. Can the dreamer become the dreamed, and the dreamed the dreamer?

Moto Hagio was born May 12, 1949, in Omuta City, Fukuoka Prefecture. She is one of a group of women born that year that broke into the male-dominated manga industry and pioneered the shojo (girls’) movement. Hagio’s Heart of Thomas, inspired by the 1964 film A Special Friendship, was one of the early entries in the shonen-ai (boys in love) subgenre. Her major works include A Drunken Dream, A,A’, They Were Eleven, and Otherworld Barbara. She’s won the Japanese Medal of Honor with the Purple Ribbon (the first woman comics creator to do so), received Japan’s SF Grand Prize, the Osamu Tezuka Culture Award Grand Prize, and an Inkpot Award, among other accolades. She lives in the Saitama Prefecture.


Rachel Thorn is from in Lansdale, Pennsylvania. She is a cultural anthropologist, writer, and an associate professor in the manga department at Kyoto Seika University. Her translations include the New York Times Best-Seller Nijigahara Holograph by Inio Asano and Hayao Miyazaki's Nausicaä of the Valley of the Wind.
This Josei (adult women) manga by the famed Hagio is equal parts memorable, odd, and beautiful, with a dreamlike narrative that explores dreams themselves.
— Publishers Weekly

Mastermanga-ka Hagio has pulled in all the dangling threads of her story, knotting time travel, extraterrestrials, cannibalism, and reincarnation together into a gripping story of love and survival. Drawn with detailed precision, and seamlessly translated by Thorn, the result is an exciting, complex plot that is easy to follow, making this perfect for both experienced manga readers and those new to the format. An exceptional addition to any science-fiction collection.
— Eva Volin - Booklist

A binge-inducing treat; full of twists and turns that make it hooking and full of real and relatable sentiments that make it hard to forget.
— Asian Movie Pulse