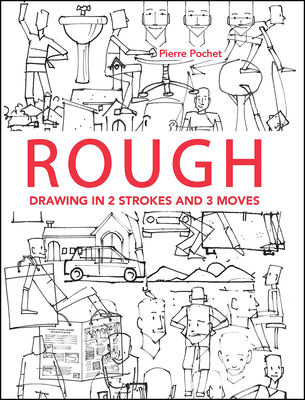 
Usually Ships in 1-5 Days
Do you know how to draw a square, triangle, and rectangle? Well, then, you know how to draw
Rough: Drawing in 2 Strokes and 3 Moves provides you with a way to start drawing that is based on a very simple observation: the human body, as well as everything surrounding us, can be broken down into elementary and basic geometric shapes.
The technique that author and teacher Pierre Pochet shows you here has no fine art or academic ambitions. Instead, it shows you how to quickly draw from memory a facial expression or a bodily movement, to flesh out a picture, to create a perspective, or to sketch a scene.
This approach to drawing is particularly useful for those who have no artistic training but who are considering a career in a creative field, whether that be advertising, design, or graphics . . . as well as for anyone who simply wants to learn how to draw
Pierre Pochet has been crazy about drawing since his early childhood. He used to doodle all over the margins of his notebooks, which did not make his teachers very happy, and his parents even less so. Because drawing comics was "not a real profession," he studied creative advertising at Brussels's Center for the Decorative Arts (CAD), which was a revelation to him. He has since had a career as an artistic director in advertising. From 1997 to 2004, he taught creative advertising design at CAD-Brussels, and since 2006 he has taught in the advertising workshop of the Saint-Luc College of Art in Brussels.