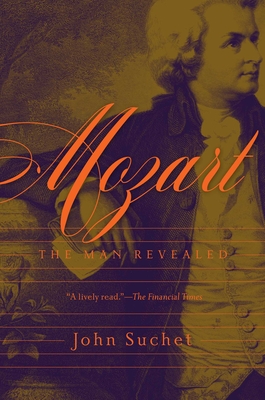 
Email or call for price
An ideal introduction to understanding the famous composer. Rich with wit and warmth, this compact biography is thoroughly enchanting.

We think we know the story of Wolfgang Amadeus Mozart's life. Austrian-born to a tyrannical father who worked him fiercely; unhappily married to a spendthrift woman; a child-like character ill at ease amid the aristocratic splendor of the Viennese court; a musical genius who died young thus depriving the world of future glories.

Yet only that last point is actually true. In this comprehensive biography, John Suchet examines the many myths and misunderstandings surrounding the world's best-loved composer. From his early days as a child prodigy performing for the imperial royal family in Vienna to the last months of his short life, driven to exhaustion by a punitive workload, one thing remained constant: his happy disposition.

Through trials and tribulations, grand successes and disheartening setbacks, Suchet shows us the real Mozart—blessed with an abundance of talent yet sometimes struggling to earn a living. His mischievous nature and earthy sense of humor, his ease and confidence in his own incredible abilities; these were traits that never left him. His music has brought comfort to countless generations; his life, though brief, is no less fascinating.
John Suchet presents Classic FM's flagship morning program in England. Before turning to classical music, John was one of the England's most respected television journalists. As a reporter he covered world events, including the Iran revolution, the Soviet invasion of Afghanistan and the Philippines revolution. John has been honored for both roles. In 1986 he was voted Television Journalist of the Year, in 1996 Television Newscaster of the Year, and in 2008 the Royal Television Society awarded him a Lifetime Achievement Award. The Royal Academy of Music has awarded him an Honorary Fellowship in recognition of his work on Beethoven, having written six books on the composer, including the highly acclaimed Beethoven: The Man Revealed. His bestselling biography of the Strauss family, The Last Waltz: The Strauss Dynasty and Vienna, was published in 2015.

"An ideal introduction to understanding the famous composer. Rich with wit and warmth, this compact biography is thoroughly enchanting."
— Kirkus Reviews (starred)

"Informative and impressive. Mozart delights the eye as well as the mind. But it’s Suchet’s keen understanding of his subject and his intelligent use of vivid detail that make his work as emotive as the Requiem, as powerful as Symphony No. 40 and as sophisticated as the Clarinet Concerto."
— Richmond Times-Dispatch