The Edge of the World: A Cultural History of the North Sea and the Transformation of Europe (Paperback) 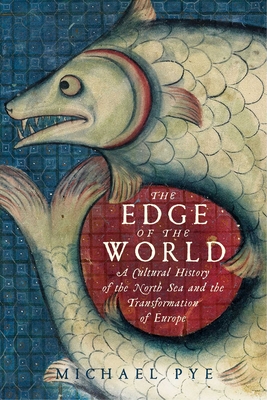 The Edge of the World: A Cultural History of the North Sea and the Transformation of Europe (Paperback)


Email or call for price
Saints and spies, pirates and philosophers, artists and intellectuals: they all criss-crossed the grey North Sea in the so-called “dark ages,” the years between the fall of the Roman Empire and the beginning of Europe’s mastery over the oceans. Now the critically acclaimed Michael Pye reveals the cultural transformation sparked by those men and women: the ideas, technology, science, law, and moral codes that helped create our modern world. This is the magnificent lost history of a thousand years. It was on the shores of the North Sea where experimental science was born, where women first had the right to choose whom they married; there was the beginning of contemporary business transactions and the advent of the printed book. In The Edge of the World, Michael Pye draws on an astounding breadth of original source material to illuminate this fascinating region during a pivotal era in world history.
Michael Pye is the author of The Drowning Room, The Pieces from Berlin, and The Edge of the World, all three of which were New York Times Notable Books of the Year. He lives in Amsterdam.

Bristling, wide-ranging and big-themed. At its most meaningful, history involves a good deal of art and storytelling. Pye’s book is full of both. An exuberant amalgam of sources. A fruitful way of reorienting our thinking about the past. By bringing back to life a mostly forgotten cast of medieval shippers, mauraders, thinkers and tinkerers, Pye challenges us to
consider how we got to be where — and who — we are.

As Michael Pye shows us in The Edge of the World, the people living around the North Sea were crucial to the birth of a new Europe. Pye, like a scholarly magpie, picks up his glittering bits from the most up-to-date academic research.

A lively account. Pye’s vivid prose proves that this time was anything but dark.

Beautifully written and thoughtfully researched. For anyone, like this reviewer, who is tired of medieval history as a chronicle of kings and kingdoms, knights and ladies, monks and heretics, The Edge of the World provides a welcome respite.


A double pleasure, first for its unique, illuminating vision of a time largely unknown and misunderstood by modern readers, but even more for its exemplary prose. Pye’s writing is vigorous and precise, the work of a writer who revels in his subject and who nurses a fondness for its many curious byways and paradoxes.

Novelist, journalist and historian Pye challenges all our notions of the Dark Ages and shows the vast accomplishments completed long before the Renaissance. A brilliant history of the Dark Ages showing the growth and development of science, business, fashion, law, politics and other significant institutions—a joy to read and reread.

Historian Pye excels at painting a unique portrait of the political, economic, and cultural transformation that has occurred on the shores of the North Sea. Pye’s message and intention provides the reader with a refreshing view of the connection between time and place. His frequent use of primary sources as well as fictional literary works gives the work an ethereal nature. Readers who enjoy broad historical analysis will enjoy this book as a companion to Lincoln Paine’s The Sea and Civilization and David Bates and Robert Liddiard’s East Anglia and its North Sea World in the Middle Ages.


Mr. Pye draws on a dizzying array of documentary and archaeological scholarship, which he works together in surprising ways. Mr. Pye advances on several fronts at once, following the overlapping currents of customary, religious and empirical ways of thinking. He writes about difficult concepts with vivid details and stories, often jump-cutting from exposition to drama like a film. It’s complicated, but fun.

No more of the tired old attribution of europe’s glories to italian city states or germanic empires; it’s around the shore of the North Sea that Michael Pye sees the slow but decisive emergence of our modern world. Utterly readable.
— Neal Ascherson, bestselling author of Black Sea

From a new perspective on the Vikings to an examination of information as a form of currency, Pye’s book offers an engaging and enlightening look at a little understood time and place.

An utterly beguiling journey into the dark ages of the north sea. A complete revelation. Pye writes like a dream. Magnificent.
— Jerry Brotton, author of A HISTORY OF THE WORLD IN TWELVE MAPS

Splendid. A heady mix of social, economic, and intellectual history, written in an engaging style. It offers a counterpoint to the many studies of the Mediterranean, arguing for the importance of the North Sea. Exciting, fun, and informative.
— Michael Prestwich, Professor of History, Durham University

Takes readers on a far-ranging tour of Europe during the Dark Ages. Pye’s style is leisurely yet authoritative, scholarly but engaging; his approach resembles that of a docent leading a group through a vast museum, with each section devoted to a different aspect of society. An eye-opening reexamination of the era, and delightfully accessible.

Michael Pye has a great journalist's eye for a story and the telling anecdote as well as a great historian's ability to place it in the bigger picture. Here he fuses those talents in a hugely eclectic study of the very first stirrings of modernity in northern Europe.
— Alexander McCall Smith, New York Times bestselling author of THE NO. 1 LADIES' DETECTIVE AGENCY

A closely-researched and fascinating characterization of the richness of life and the underestimated interconnections of the peoples all around the medieval and early modern North Sea. A real page-turner.
— Chris Wickham, author of THE INHERITANCE OF ROME: A HISTORY OF EUROPE FROM 400 TO 1000

For more than a millennium, the North Sea was our trading floor and our internet. Yet this connection, this period, and this sea remain wrapped in fog. With elegant writing and extraordinary scholarship, Pye does a rare but important thing by focusing not on lands but on the waters that unite them.
— Hugh Aldersey-Williams, author of PERIODIC TALES and ANATOMIES

Persuasive and eloquent. A radical perspective on the modern world. No book I have read has looked at the available evidence in the way it is presented here. A multilayered, complicated, dense book that demands time to be read and be digested but rewards by giving one plenty to chew on.

A treasure chest. [Pye] breaks most of the rules of scholarly history, but who cares? The end result is brilliantly illuminating. Pye’s creativity brings light to this once dark time.

Brilliant. Pye is a wonderful historian . . . bringing history to life like no one else.
— Terry Jones

Excellent. The Edge of the World does what good non-fiction should, in making the reader see the world in a different light.


The amazing story of how the North Sea made us who we are. A dazzling historical adventure.

It is the measure of Pye’s achievement that he can breathe life into the traders of seventh-century Frisia or the beguines of late-medieval Flanders as well as into his more celebrated subjects. Hugely enjoyable. Grey the waters of the North Sea may be; but Pye has successfully dyed them with a multitude of rich colors.

This is the kind of book that can open up new vistas. An inspiring book, full of surprises.

A compelling account of societies around the North Sea will make you see the world in a different light.