The Little Book of Restorative Justice: Revised and Updated (Justice and Peacebuilding) (Hardcover) 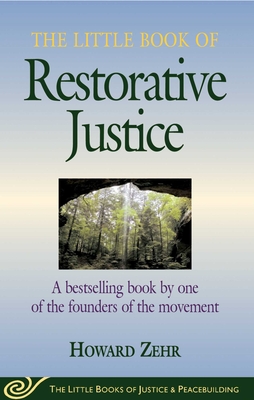 The Little Book of Restorative Justice: Revised and Updated (Justice and Peacebuilding) (Hardcover)


Email or call for price
Howard Zehr is the father of Restorative Justice and is known worldwide for his pioneering work in transforming understandings of justice. Here he proposes workable principles and practices for making Restorative Justice possible in this revised and updated edition of his bestselling, seminal book on the movement. (The original edition has sold more than 110,000 copies.)

Restorative Justice, with its emphasis on identifying the justice needs of everyone involved in a crime, is a worldwide movement of growing influence that is helping victims and communities heal, while holding criminals accountable for their actions.

This is not soft-on-crime, feel-good philosophy, but rather a concrete effort to bring justice and healing to everyone involved in a crime. In The Little Book of Restorative Justice, Zehr first explores how restorative justice is different from criminal justice. Then, before letting those appealing observations drift out of reach into theoretical space, Zehr presents Restorative Justice practices. Zehr undertakes a massive and complex subject and puts it in graspable from, without reducing or trivializing it.

This resource is also suitable for academic classes and workshops, for conferences and trainings, as well as for the layperson interested in understanding this innovative and influential movement.
Howard Zehr directed the first victim offender conferencing program in the U.S. and is one of the original developers of restorative justice as a concept. A prolific writer and editor, speaker, educator, and photojournalist, Zehr has spoken and trained others throughout North America and in more than 25 other countries, including Brazil, Japan, Jamaica, Northern Ireland, the Ukraine, and New Zealand, where a restorative approach in the juvenile justice system has led to a dramatic drop in youth crime.