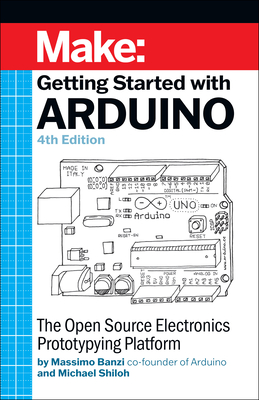 Arduino is the open source electronics prototyping platform that is the heart of the Maker world. This thorough introduction, updated for the latest Arduino IDE release and the new ARM-based boards, helps you start prototyping right away. From obtaining the required components to putting the final touches on your project, all the information you need is here Getting started with the Arduino is a snap To use the introductory examples in this guide, all you need is an Arduino Uno or Nano, along with a USB cable and an LED. The easy-to-use, free Arduino development environment runs on Mac, Windows, and Linux.Join hundreds of thousands of hobbyists who have discovered this incredible (and educational) platform.In Getting Started with Arduino, you will learn about:

Written by Massimo Banzi, the co-founder of Arduino and Michael Shiloh, Arduino educational lead.
Massimo Banzi is the co-founder of the Arduino project and has worked for clients such as: Prada, Artemide, Persol, Whirlpool, V&A Museum and Adidas. He spent 4 years at the Interaction Design Institute Ivrea as Associate Professor. Massimo has taught workshops and has been a guest speaker at institutions like: Architectural Association - London, Hochschule f r Gestaltung und Kunst Basel, Hochschule f r Gestaltung Schw bisch Gm nd, FH Potsdam, Domus Academy, Medialab Madrid, Escola Superior de Disseny Barcelona, ARS Electronica Linz, Mediamatic Amsterdam, Doors of Perception Amsterdam.Before joining IDII he was CTO for the Seat Ventures incubator. He spent many years working as a software architect, both in Milan and London, on projects for clients like Italia Online, Sapient, Labour Party, BT, MCI WorldCom, SmithKlineBeecham, Storagetek, BSkyB and boo.com.Michael Shiloh is Associate Professor at the California College of the Arts where he teaches electronics, programming, robotics, and electromechanics. Trained formally as an electrical engineer, Michael worked for various consumer and embedded engineering firms before discovering a passion for teaching. Michael frequently lectures and speaks at conferences and universities worldwide. In 2013, Michael started working for Arduino, speaking about the open-source electronics prototyping platform to new audiences and leading hands-on workshops.