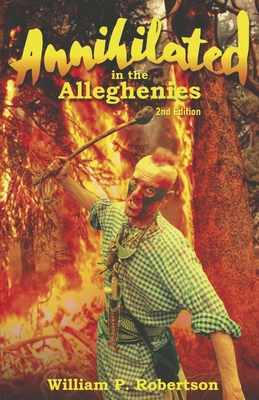 This is book number 3 in the Alleghenies Series series.

After their family is annihilated by the worst sort of treachery, Lightnin' Jack Hawkins and his brother, Red Hawk, find themselves in a grim situation. Facing a winter without adequate supplies, they return to civilization only to fight in Major James Grant's disastrous attack on Fort Duquesne. Retreating to Fort Ligonier, they later withstand two French assaults. In the second, Red Hawk is murdered in gristly fashion by the rogue Iroquois princess, Dark Star. Jack must then track her down and end her evil. Full of hatred and psychotic rage, Dark Star is a villain not soon to be forgotten. Nor is this bloody chapter of the French and Indian War set in the Pennsylvania wilderness during the autumn of 1758.
William P. Robertson was born and raised in the wilds of Pennsylvania and has been an avid woodsman since his youth. He first read exploits of the eastern mountain men in the Ben Bowie comic books of the late 1950s. Soon, Bill was devouring all the Indian and pioneer biographies he found in Lincoln Elementary School in Braford, PA. Some of his favorite tales were of Dan Morgan, Davy Crockett, and Black Hawk, the Sac chief. He also begged his parents to buy him Paul I. Wellman's wonderful book, "Indian Wars and Warriors East." These stories, along with Bill's own hunting and fishing adventures, served as the inspiration for the Alleghenies novel series. The author is now having more fun as a French and Indian War reenactor. And, yes, Bill did wear a coonskin cap when he was a lad.