Let Me Play: The Story of Title IX: The Law That Changed the Future of Girls in America (Hardcover) 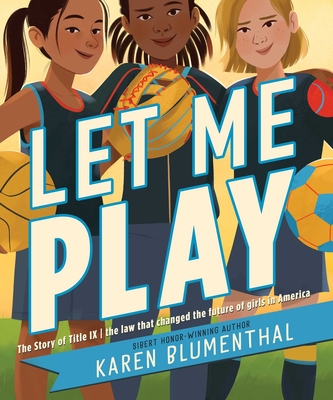 Let Me Play: The Story of Title IX: The Law That Changed the Future of Girls in America (Hardcover)


On Our Shelves Now
Celebrate the 50th anniversary of Title IX, the law that opened the door for greater opportunities for girls and women, with this refreshed edition of the nonfiction illustrated middle grade book about an important victory in the fight for equality.

Not long ago, people believed girls shouldn’t play sports. That math and science courses were too difficult for them. That higher education should be left to the men. Nowadays, this may be hard to imagine, but it was only fifty years ago all of this changed with the introduction of the historical civil rights bill Title IX. This is the story about the determined lawmakers, teachers, parents, and athletes that advocated for women all over the country until Congress passed the law that paved the way for the now millions of girls who play sports; who make up over half of the country’s medical and law students; who are on the national stage winning gold medals and world championships; who are developing life-changing vaccines, holding court as Supreme Court Justices, and leading the country as vice president. All because of Title IX and the people who believed girls could do anything—and were willing to fight to prove it.

This updated edition of Let Me Play includes new chapters about how Title IX is being used in the fight for transgender rights and justice for sexual assault survivors and a refreshed epilogue highlighting the remarkable female athletes of today and the battles they’re still fighting.
Karen Blumenthal (1959–2020) was a financial journalist and editor whose career included five years with The Dallas Morning News and twenty-five with The Wall Street Journal before becoming an award-winning children’s nonfiction book writer. Three of her books were finalists for the YALSA Excellence in Nonfiction for Young Adults Award, and she was the author of Sibert Honor Book Six Days in October: The Stock Market Crash of 1929.