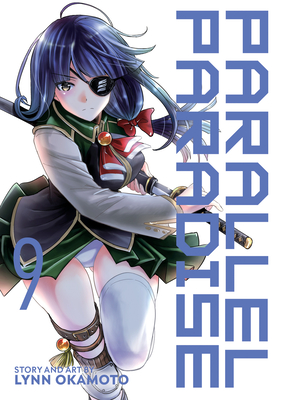 This is book number 9 in the Parallel Paradise series.

When Yota and the girls retreat from the sinister witch Galia, the last thing they expect to encounter in the underground ruins is a childhood friend. But wait, isn’t the jealous god supposed to reside down there…? Meanwhile, Galia descends on Meese Town, hungry for sacrifices and sowing disaster. Misaki takes the new Guardians to confront the witch, but how can they hold out against a power as ancient and sadistic as hers?
Lynn Okamoto is a veteran Japanese manga creator, best known for the manga and anime series Brynhildr in the Darkness and Elfen Lied, as well as the ongoing manga series Parallel Paradise.