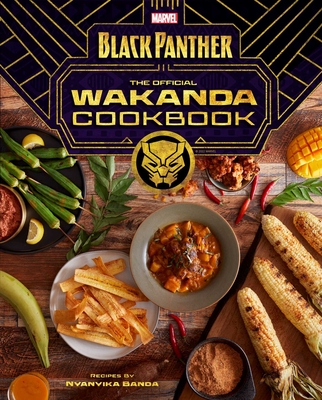 
Usually Ships in 1-5 Days
Wakanda forever! Celebrate the flavors of Africa with this cookbook inspired by over fifty years of Black Panther comics.

Create meals fit for a king with this cookbook featuring over seventy delicious recipes from Wakanda and the African continent. Whether you’re welcoming Wakandan envoys, or simply hosting a watch party with friends, the 70+ African cuisine-inspired recipes in Marvel's Black Panther: The Official Wakanda Cookbook make it a must-have volume for any kitchen.

• Eat like King T’Challa himself: Featuring classic cuisine such as Roasted Chambo, Braised Oxtail and Dumplings, and Glazed Road Runner Wings, this cookbook is a tribute to culinary traditions from all over the African continent.

• Over 70 incredible recipes: From street food and entrees, to desserts and drinks, you will have recipes for every occasion.

• For all skill levels: Marvel's Black Panther: The Official Wakanda Cookbook can be enjoyed by people of all ages. The book features accessible, fun recipes for seasoned chefs and beginners alike.

• Be inspired by stunning food photography: Complete with incredible full-color photography recalling the amazing visual splendor of Wakanda, you’ll be inspired to bring a touch of royalty to your kitchen.

• The most delicious addition to your Marvel collection: The perfect companion to any Black Panther collection, the regal and delicious recipes of Marvel's Black Panther: The Official Wakanda Cookbook make it Insight Editions’ most impressive cookbook yet.
Nyanyika Banda is a Malawian-American chef, writer, and entrepreneur. She earned a Culinary Degree from Madison College in 2012. While attending Madison College she competed and placed in multiple American Culinary Federation competitions. She has worked in a number of acclaimed kitchens across the country including WD-50 and the Saveur Magazine test kitchen. After her experiences in New York City, Banda moved back to the Midwest to attend the University of Wisconsin-Superior. She designed her history and writing majors around African Foodways and has been a scholar of the topic ever since.

It was as an undergraduate that she started her writing career with a monthly column in the TASTE section of the Duluth News Tribune. She also started an underground pop-up restaurant called Martha’s Daughter. Her food garnered a cult following and on her graduation day she picked up the keys to her new brick and mortar. Banda helped put Duluth on the map with her critically acclaimed restaurant Martha’s Daughter, described by the Minneapolis Star-Tribune as “a stylish reflection of its chef/owner” with “an eclectic and globe-hopping menu of meticulously prepared and wonderfully affordable dishes.” In 2018 she won an Eater Award.

Banda has since returned to her hometown of Amherst, Massachusetts where she teaches Culinary Arts at Holyoke Community College and continues to freelance. Banda has contributed to Food52, Thrillist, Saveur, and RESY; she also contributed an essay to the book Knives and Ink.

He is the author and editor of the new Black Panther: Tales of Wakanda prose anthology from Titan Books and Marvel, the first prose anthology dedicated to the first mainstream black superhero. He is also the author of The Black Panther: Who Is The Black Panther? prose novel, which was nominated for an NAACP Image Award in 2019 and The Invisibles: The Untold Story of African American Slavery Inside The White House, which was named as the 2017 silver medal award winner in U.S. History in the Independent Publisher Book Awards and one of the top history books of 2016 by Smithsonian.com.

Jesse also wrote Star Wars: The Force Awakens - Finn’s Story young adult novel and Black Men Built The Capitol: Discovering African American History In and Around Washington, D.C. He was one of the first Black writers to author a solo Superman story with his story “Deadline” in the Superman: Red and Blue comic series and also wrote a semi-autobiographical story called “Heritage” for the Represent! comic series, both for DC Comics.

Jesse currently hosts the Saturday edition of C-SPAN’s Washington Journal and serves as a commentator for NPR’s Here & Now and Black News Channel’s DC Today. He also is currently serving as an assistant professor at the School of Media and Public Affairs at George Washington University, where he teaches beginning journalists.
"Packed with cultural flavor...The recipes have something for every occasion with a range of dishes, and like the film, the book can be enjoyed by people of all ages with accessible options for beginners and serious chefs."
— Kitchn

"Draws from a variety of real-life countries and cultures in Africa…Making and enjoying these recipes is for people who love bold flavor."
— GeekDad

“Chef Banda … blends her story with Wakandan lore, weaving a lovely setting for any cosplaying cook to get themselves ready to cook Wakanda style…Take a home-cooked culinary journey to Wakanda with your family and friends any time you like. Make this food with love and feel satisfied.”
— Black Girl Nerds

"Mx. Banda’s recipes—like chambo, a traditional fish dish from Malawi—speak directly to Wakanda’s varying locations in Africa throughout the run of the comics."
— New York Times

"In the new Wakanda cookbook, Black Panther food lore comes to life...written from the perspective of a young woman who is plucked from her mother’s stall in the capital city’s marketplace to become the royal chef to King T’Challa; a woman who — like Banda — was influenced by the elder women in her family...Banda drew not just on studies of African foodways, but on family recipes. One dish, braised kale with tomatoes, was cribbed directly from the last meal Banda cooked with their aunt, who, like Banda’s father, was born in Malawi."
— The Washington Post

"Taking a generous amount of Black excellence, mixing it with two parts fantasy, Chef Nyanyika Banda managed to come up with an entire Wakanda cookbook...Banda dug deep into her imagination in order to whip up the flavorful lineup of dishes which include items like market food, desserts and even gluten-free and vegan meals."
— The TODAY Show

"Banda’s background made her the perfect author for this cookbook."
— Guilty Eats

"This volume presents 73 recipes in its 140+ pages, with musings on both the dishes’ places in Wakanda as well as in African and world cuisines. The ebb and flow of cooking ingredients and techniques worldwide is lightly touched on throughout the book, making for a lovely, subtle grounding of a fictional nation and its cuisine in our real world."
— The Frumious Consortium