Remember This: The Lesson of Jan Karski (Paperback) 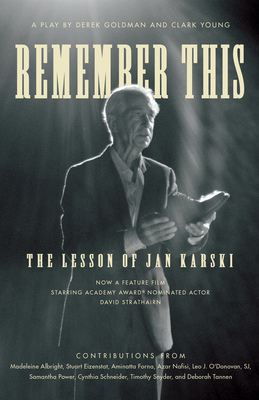 Remember This: The Lesson of Jan Karski (Paperback)

Remember This tells the story of Jan Karski, a Holocaust witness who risked his life to carry reports from war-torn Poland to the Allied nations and Oval Office. Despite the West's disbelief, Karski continued to tell others about the atrocities he saw, and would do so for the rest of his life. This play carries forward his legacy of bearing witness.

Clark Young is a writer and teacher based in Brooklyn, New York, and originally from Portland, Maine. He cocreated every iteration of Remember This from Warsaw and New York City to London and Washington, DC.Derek Goldman is the chair of Georgetown University's Department of Performing Arts and director of the Theater and Performance Studies Program, and he is the cofounding director of the Laboratory for Global Performance and Politics. He is an award-winning international stage director, producer, playwright, and educator whose work has been seen off-Broadway, nationally, and at numerous leading theaters around the world.