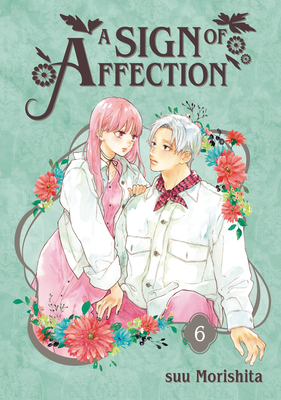 This is book number 5 in the A Sign of Affection series.

Yuki is a typical college student--it's just that she can't hear. A chance encounter on a train leads to a serious crush...but will he give her a chance? A sweet and relatable manga romance from the creator of Shortcake Cake!

Yuki, who’s always been deaf, is used to communicating with sign language and her phone. But she’s not used to English, so when a tourist from overseas asks for directions, she nearly panics…until a handsome stranger steps in to help. His name is Itsuomi, and it turns out he’s a friend of a friend. A charismatic globetrotter, Itsuomi speaks three languages, but he’s never had a deaf friend. The two feel drawn to each other and plan a date on a romantic winter’s night, but Yuki’s friend is afraid that she might be setting herself up to get hurt. Could this be something real? Or will these feelings melt away with the snow?
One of the most prolific and successful shojo manga creators of the last decade, suu Morishita's English-language debut was Shortcake Cake, which has more than one million copies in print worldwide. Morishita's second series to be released in English is A Sign of Affection.