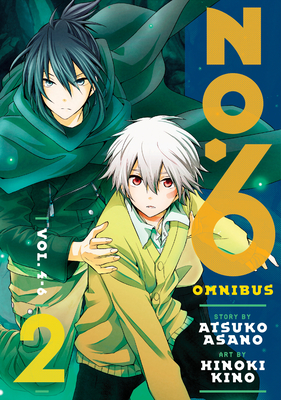 This is book number 2 in the NO. 6 Manga Omnibus series.

The classic dystopian manga returns! Experience the story of two boys who uncover a terrible conspiracy and turn City No. 6 on its head, in three collectible 3-in-1 omnibus editions featuring extra-large pages.

The classic dystopian manga returns in three 3-in-1 omnibus editions! After stumbling across his childhood friend Safu’s favorite coat on the streets of West Block, Shion learns that she has been arrested and imprisoned in No. 6’s infamous Correctional Facility. He sets out alone to save her, but the ever-watchful Rat has other plans. Meanwhile, No. 6 prepares to launch a host of soldiers and armored vehicles in a manhunt through West Block. Shion’s and Rat’s fates grow ever more tightly intertwined as they embark on an impossible mission to No. 6, where Shion will learn the ugly history behind the “perfect” city.
Born in 1954 in Okayama Prefecture, Atsuko Asano is a Japanese writer whose decades-long career has included penning the children's series Telepathy shojo ran and the manga series The Manzai Comics. Her book series, Battery, received the Noma Prize for Juvenile Literature in 1997, the Shogakukan Children's Publication Culture Award in 2005, and a film adaptation in 2007.

Since debuting with No. 6, manga writer and artist Hinoki Kino has gone on to work on series such as Setsuna Graffiti and Bungou Stray Dogs.