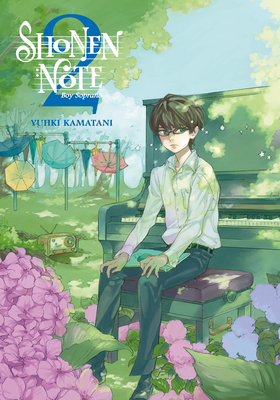 This is book number 2 in the Shonen Note: Boy Soprano series.

Now that Yutaka has officially decided to join the city opera, he’s cast in a leading role in the ghost story The Turn of the Screw. Meanwhile, school choir president Betsuyaku struggles to prove that he and his choir are capable of winning the gold prize in the NHK All-School Choir Competition. But can he bring the choir together to achieve greatness, or will he alienate all of its members?
Yuhki Kamatani is a Japanese manga writer and artist best known for Nabari no Ou, Hiraeth: The End of the Journey, and Our Dreams at Dusk: Shimanami Tasogare. Shonen Note: Boy Soprano was a Jury Selection for the 17th Japan Media Arts Festival in 2013.