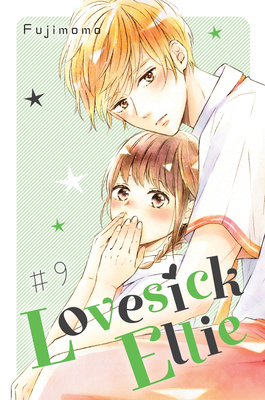 This is book number 9 in the Lovesick Ellie series.

The outrageous shojo comedy finally comes to print! A boy and a girl come to share each other's secrets: She remixes her real life and fantasies into a pervy Twitter feed, and he's selfish and manipulative on the inside. The relationship (?) that results is explosive and hilarious, perfect for fans of Kiss Him, Not Me!, Horimiya, and Wotakoi!

At her high school, she's Eriko Ichimura, the girl so boring no one remembers she exists. But online, she's "Lovesick Ellie," a brash and lusty alternate persona with quite a viral following! Ellie's favorite pastime? Spying on her handsome and perfect classmate Ohmi and spinning wild fantasies in the form of very thirsty tweets. But one day, quite by accident, Eriko learns that Ohmi isn't as perfect as she thought...and he discovers her secret to boot! What's ahead for this two-faced boy and pervy girl?
Fujimomo is a popular creator of shojo manga, including the popular Lovesick Ellie, which is her English-language debut, available in print and digital from Kodansha Comics.