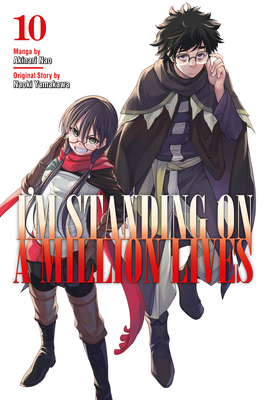 
Usually Ships in 1-5 Days
The provocative action manga that's about to become a major anime! A teenage loner gets transported into a fantasy world with his two scary female classmates. The girls find themselves as a wizard and a warrior, but he's woken up as... a farmer?! How will be become a hero now? A new fantasy perfect for fans of Sword Art Online and That Time I Got Reincarnated as a Slime!

END OF THE SIXTH QUEST

Yotsuya and the others lead a massive takedown of the mob that has long ruled Goldia’s criminal underworld. Unfortunately, the end of organized crime hardly spells the end for the nation’s problems with its neighbor, Ihar-Nemore. Thankfully, Yotsuya thinks up a way to help the two countries begin to heal. With their quest completed, the party returns to Japan for some well-earned rest, but their world may not be as safe from the dangers of the other one as they'd like...
Naoki Yamakawa is a writer who created the manga I'm Standing on a Million Lives with Akinari Nao. Yamakawa is also the creator of My Home Hero with Masashi Asaki. I'm Standing on a Million Lives is Yamakawa's first work to be translated into English.

Akinari Nao is a manga artist who debuted in 2006 with the manga adaptation of the light novel series Psycho Busters. Nao later illustrated the original manga Trinity Seven, which was adapted into light novels and a hit anime in 2014. I'm Standing on a Million Lives is Nao's first manga to be published in English.