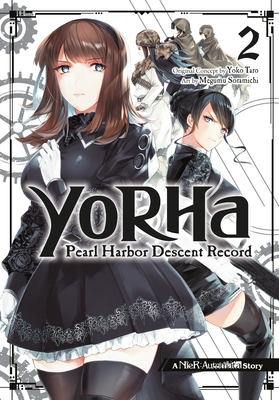 This is book number 2 in the YoRHa Pearl Harbor Descent Record series.

A manga series set in the universe of the award-winning, post-apocalyptic action RPG NieR:Automata!

Of the sixteen YoRHa androids who landed on Earth to recapture it from the enemy machine lifeforms, only four have survived the descent. Command denies their request to have their mission canceled, however, leaving them stranded on Earth with no choice but to attempt to carry out an impossible mission. Immediately beset by the machines, the YoRHa units are saved by the appearance of another group of android survivors from a much earlier war. Though the older androids are suspicious of the newer ones, an uneasy alliance is forged. But this tenuous peace is about to be put to the test now that buried secrets are coming to light...
Yoko Taro is a video game writer and director best known for his direction of the critically acclaimed and wildly popular series NieR, Drakengard, and SINoALICE.

Megumu Soramichi is the artist of the YoRHa manga.