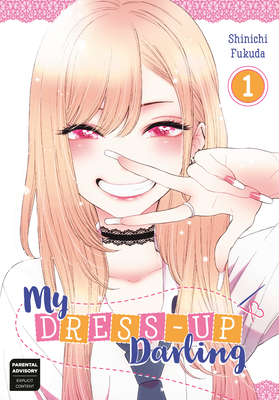 This is book number 1 in the My Dress-Up Darling series.

A loner boy and a flashy girl find common ground via cosplay in this sweet and spicy romcom!

Traumatized by a childhood incident with a friend who took exception to his love of traditional dolls, doll-artisan hopeful Wakana Gojou passes his days as a loner, finding solace in the home ec room at his high school. To Wakana, people like beautiful Marin Kitagawa, a trendy girl who's always surrounded by a throng of friends, is practically an alien from another world. But when cheerful Marin--never one to be shy--spots Wakana sewing away one day after school, she barges in with the aim of roping her quiet classmante into her secret hobby: cosplay! Will Wakana's wounded heart be able to handle the invasion from this sexy alien?!
Shinichi Fukuda is a prominent female creator of mature manga. My Dress-Up Darling is her first series to be published in the North American market.