Cherry Magic! Thirty Years of Virginity Can Make You a Wizard?! 02 (Paperback) 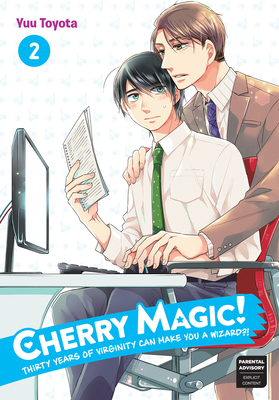 Cherry Magic! Thirty Years of Virginity Can Make You a Wizard?! 02 (Paperback)

This is book number 2 in the Cherry Magic! Thirty Years of Virginity Can Make You a Wizard?! series.

It's complicated: A thirty-year-old virgin gets more than he bargained for when his newfound magical power reveals he's the object of his male coworker's affections!

Businessman Adachi turned thirty a virgin, and now he's a wizard who can read the mind of anyone he touches...which is how he learned that his handsome coworker Kurosawa was in love with him! Inexperienced Adachi was initially bewildered by Kurosawa's intense feelings, but after being exposed to Kurosawa's genuine affection, Adachi finds Kurosawa on his mind a lot more often than he'd care to admit these days! Will the upcoming staff business trip turn into a trip for two for Kurosawa and Adachi?!
Yuu Toyota is a manga creator with numerous series spanning many different genres, from shojo to slice of life. Cherry Magic! is their first series in the yaoi genre.