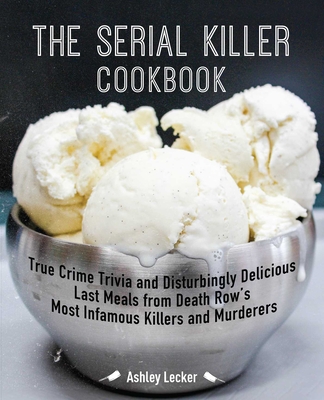 
Usually Ships in 1-5 Days
Bring your love of true crime into the kitchen with meals ranging from the bizarre (a single unpitted black olive) to the gluttonous (a dozen deep-fried shrimp, a bucket of fried chicken, French fries, and a pound of strawberries), inspired by Ted Bundy, John Wayne Gacy, and other notorious death row inmates.

The perfect gift for murderinos and true crime fans, The Serial Killer Cookbook: Last Meals pairs serial killer trivia with the recipes of the meals these killers ate during their final hours. With full-color photos, chilling true crime facts, and easy-to-follow steps, you’ll be cooking up killer meals in no time. This collection of recipes is both delicious and surprising, and spans breakfast staples to indulgent desserts, including:

Ashley Lecker is a true crime lover, avid recipe developer, barre lover, and general history nerd. She is a graduate of Edgewood College in Madison, WI, and UW-Green Bay. Ashley previously worked in the public sector for the House of Representatives and at a nonprofit before obtaining her teaching license. She currently works in the local school system and in recipe development while publishing her blog, Cheese Curd in Paradise. Ashley lives in Green Bay, WI, with her husband, two sons, and cats. She enjoys traveling with her family, watching the Green Bay Packers, and drinking a cold beer on her patio.