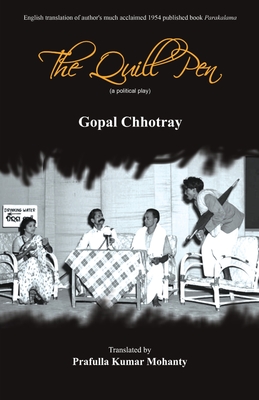 Rural Odisha's modernization and the birth pangs of a sound political structure resolving all ethical binaries is the primal theme of Gopal Chhotray's Academy Award winning play Para Kalam(The Quill Pen). The realism of proscenium drama was given a technical facelift by the dramatist and can safely be called innovative and the introducer of post realist dramaturgy into the Odia stage. The Quill Pen being the first political play in Odia has several layers of meaning. The change in socio-intellectual awareness in rural Odisha apart, the fight for food security stymied by bureaucratic corruption tacitly supported by the political masters also has been dramatized with artistic fervor. The hero of the play is the Chief Minister of the state but is torn between his political aspirations and ethical compulsions. Finally the arc of the play bends towards moral energy and the Chief Minister rises above petty mundanity to sacrificial heroism. Love, although not the main thrust of the play has a fair measure of sophistication. The composition of scenes like the stringing of a pearl necklace is masterly. At the same time the dramatist's understanding of the rural milieu, modern aspirations and his grasp of the economic and political realities of Odisha are a touch above the ordinary. Gopal Chhotray's deep moral sense and his hope for the development of Odisha are discernible despite the impersonal dramatization of a very complex theme. The Quill Pen is majestic on stage and gripping on the study table.