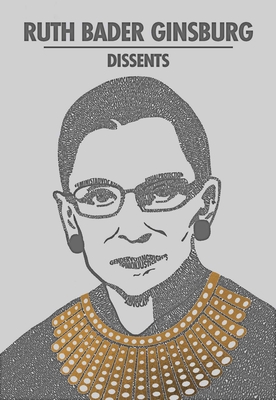 During her 27 years as an associate justice on the U.S. Supreme Court, Ruth Bader Ginsburg became well known for her strongly worded dissenting opinions against the decisions of the conservative majority. Ginsburg was a fierce supporter of women’s rights whose personal experiences helped shape her into a feminist icon who employed logical, well-presented arguments to show that gender discrimination was harmful to all members of society. Ruth Bader Ginsburg Dissents features 15 legal opinions and briefs, including majority and dissenting opinions that Ginsburg drafted during her time on the U.S. Supreme Court and briefs from her career before she was appointed to the court in 1993.
Ruth Bader Ginsburg (1933–2020) was an associate justice of the Supreme Court of the United States from 1993 until her death in 2020. A graduate of Cornell University and Columbia Law School, Ginsburg forged a distinguished career, serving as a professor of law at Rutgers University School of Law and Columbia Law School, as the ACLU's general counsel, and as a judge of the United States Court of Appeals for the District of Columbia Circuit, before being appointed to the Supreme Court in 1993. An advocate for women's rights and gender equality, Ginsburg was the first Jewish woman and the second woman to serve on the Supreme Court. During her tenure as an associate justice, she wrote many majority opinions, as well as many fiery dissents. Ginsburg died at her home on September 18, 2020.

Linda Greenhouse is a senior research scholar at Yale Law School where, following a long career at the New York Times, she has taught since 2009. She was the newspaper’s Supreme Court correspondent for nearly 30 years, winning a Pulitzer Prize and other major journalism awards for her coverage of the Court. In her extracurricular life, she has served since 2017 as president of the American Philosophical Society, the country’s oldest learned society, and she currently serves on the Council of the American Academy of Arts and Sciences. Among her publications are Becoming Justice Blackmun, a biography of the Justice; Before Roe v. Wade: Voices That Shaped the Abortion Debate Before the Supreme Court’s Ruling (with Reva B. Siegel); The U.S. Supreme Court: A Very Short Introduction; The Burger Court and the Rise of the Judicial Right (with Michael Graetz), Just a Journalist, a memoir; and most recently, Justice on the Brink: The Death of Ruth Bader Ginsburg, the Rise of Amy Coney Barrett, and Twelve Months that Transformed the Supreme Court. She is a graduate of Radcliffe College (Harvard) and earned a Master of Studies in Law degree from Yale Law School, which in 2007 awarded her the Yale Law School Alumni Association Award of Merit. She currently resides with her husband in Connecticut.