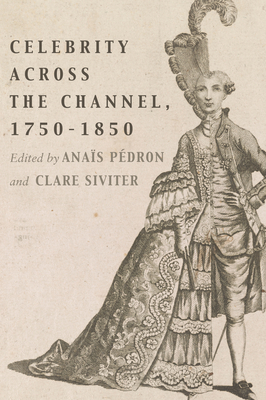 
Email or call for price
Celebrity Across the Channel, 1750-1850 is the first book to study and compare the concept of celebrity in France and Britain from 1750 to 1850 as the two countries transformed into the states we recognize today. It offers a transnational perspective by placing in dialogue the growing fields of celebrity studies in the two countries, especially by engaging with Antoine Lilti’s seminal work, The Invention of Celebrity, translated into English in 2017. With contributions from a diverse range of scholarly cultures, the volume has a firmly interdisciplinary scope over the time period 1750 to 1850, which was an era marked by social, political, and cultural upheaval. Bringing together the fields of history, politics, literature, theater studies, and musicology, the volume employs a firmly interdisciplinary scope to explore an era marked by social, political, and cultural upheaval. The organization of the collection allows for new readings of the similarities and differences in the understanding of celebrity in Britain and France. Consequently, the volume builds upon the questions that are currently at the heart of celebrity studies.
ANAÏS PÉDRON is an independent scholar based in London, England. She has recently published the article “‘Nous aussi nous sommes citoyennes’: Female Activism during the French Revolution” in Women in French Studies (Special Issue 2019), and the chapter “Olympe de Gouges, anti-esclavagiste et anticolonialiste?” in Les Lumières, l’esclavage et l’idéologie coloniale: XVIIIe - XIXe siècle, ed. Pascale Pellerin.

CLARE SIVITER is a theater historian of the longer French Revolutionary period and is lecturer in French Theatre at the University of Bristol. She is the author of Tragedy and Nation in the Age of Napoleon.