Gone By Morning: A Novel (Hardcover) 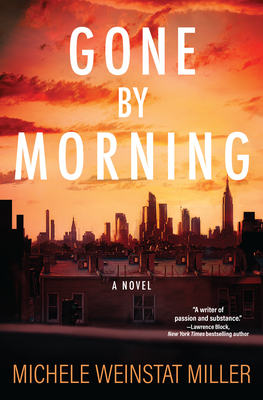 New York City in June is no joke--and as a wave of violence engulfs the sweltering city, an even greater danger looms in this riveting thriller for fans of Iris Johansen and Tess Gerritsen.

As the heat rises on a New York summer, a suicide bomb set off in a Times Square subway station nearly claims the life of 68-year-old ex-madam Kathleen. Then a woman is brutally murdered, her body dumped on a marshy beach in Queens. The woman, Sharon, was last seen by 26-year-old Emily--a Deputy Press Officer working at City Hall--getting into a car in front of the building where she and Kathleen both live in far upper Manhattan.

Emily requests an autopsy report from the Chief of the NYPD, but she doesn't realize the gravity of using her position to gain information. Things turn deadly when a bomb is planted in her building, gutting it with a raging fireball. Kathleen, Emily, and Emily's two-year-old daughter, Skye, barely escape with their lives.

Could Kathleen's criminal history be at the heart of the violence? If Emily can't help her, Kathleen could spend the rest of her life in prison. And when Emily discovers a shocking connection between herself and Kathleen, the stakes become impossibly high.

By the time Emily realizes she's in grave danger, it may be too late. She's beyond the reach of the cops, of City Hall, of her family...and a killer is closing in fast.

An Amazon Breakthrough Novel Awards semi-finalist, Michele Weinstat Miller is an attorney who lives in Upper Manhattan with her husband, 18-year-old twin sons, two cats, and a large dog. Until recently, Michele served as the chief government ethics prosecutor for NYC. Her experience and the crazy stories that reached her desk from in and around City Hall bring realism and humor to Gone By Morning. She currently serves as legal counsel to a non-profit agency that provides re-entry services to the formerly incarcerated. Michele has a black belt in the Jaribu System of Karate and was once a roller-disco champ.

Praise for Gone By Morning
“The twists and turns will keep readers spellbound. Miller is off to a promising start.”
—Publishers Weekly

“Miller's background as a lawyer in New York brings an authenticity to this intense, intricately plotted thriller. The politics and menacing atmosphere combine in a promising debut.”
—Library Journal starred review

“With deft prose and an insider’s knowledge of the legal and political workings in NY, Michele Weinstat Miller has layered a compelling multi-generational family drama within a taut, suspenseful thriller that keeps the reader turning pages from beginning to twist-laden end.”
—Diana Gould, author of Coldwater