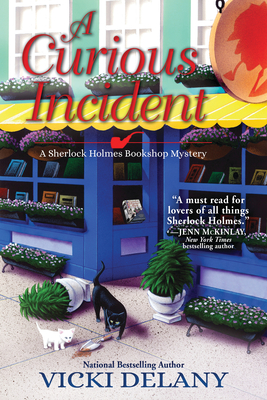 This is book number 6 in the A Sherlock Holmes Bookshop Mystery series.

It's up to Gemma and Jayne to root out the killer in national bestselling author Vicki Delany's sixth Sherlock Holmes Bookshop mystery when the winner of a garden tour trophy is left pushing up daisies.

"I am not a Consulting Detective," Gemma Doyle reluctantly tells 10-year-old Lauren Tierney, when the little girl comes to the Sherlock Holmes Bookshop and Emporium to beg Gemma to find her missing cat, Snowball. Gemma might not be able to follow the clues to find the cat, but her dog Violet follows her nose to locate the missing kitten in a neighbor's garden shed. Gemma and Violet proudly return Snowball to her grateful owner, and Gemma basks in praise for a job well done. But a few days later Lauren is back with ten dollars in hand, wanting to once again hire a consulting detective, and this time for a far bigger job: Her mother has been accused of murdering her garden club rival.
Sheila Tierney's garden, which everyone said was the one to beat for the West London Garden Club trophy, had been vandalized the night before the club's early summer tour. Sheila confronted her former friend and gardening partner Anna Wentworth in a towering rage, and the women nearly came to blows. Later that night, after having won the trophy for best garden, Anna is found murdered and Sheila Tierney is the police's prime suspect.
Despite herself, and despite the disapproval of her police detective boyfriend Ryan Ashburton, the game is once again afoot, and Gemma finds herself and Jayne Wilson using their powers of deduction to ponder yet another curious incident.
Vicki Delany is a national bestseller in the US and one of Canada's most prolific and varied crime writers. A former computer programmer and systems analyst, Vicki lives and writes in bucolic Prince Edward County, Ontario. She is the past president of the Crime Writers of Canada.

“Framed by its small-town Cape Cod setting, plenty of Sherlock Holmes lore, and details of running a small business, this cozy has a cast of engaging characters.”
—Booklist

“Another good story in the Sherlock Holmes series with interesting characters, a snarky cat and a fun story for fans to follow along with.”
—Red Carpet Crash

Praise for the Sherlock Holmes Bookshop Mysteries:
“Each new entry in this series has been better than the last.”
—Kirkus Reviews

“These books are so much fun and so well-done, it is clear that Delany is in love with her characters as much as her die-hard fans are.”
—Suspense Magazine

"A great read for mystery fans and a must read for Sherlockians."
—Night Owl Reviews, Top Pick

"Vicki Delany is one of my favorite mystery authors."
—Kate Carlisle, New York Times bestselling author of the Fixer-Upper mysteries