The Blood of the Immortals (Hardcover) 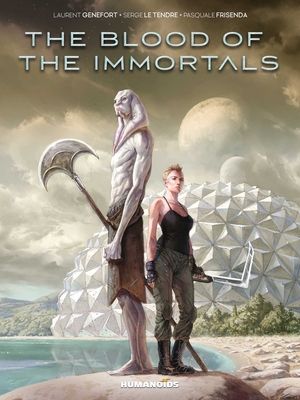 The Blood of the Immortals (Hardcover)

By Françoise Ruscak, Francesco Trifogli (By (artist)), Laurent Genefort (From an idea by), Montana Kane (Translated by)


Usually Ships in 1-5 Days
An expedition arrives on the planet Verfebro in search of life's greatest ambition: immortality.

What if the key to eternal life were only a few planetary systems away? A motley crew is sent to Verfebro in search of a mystifying elixir—one that runs through the veins of a ferocious local species: the Dracs. The members of the expedition will do anything to uncover the mysteries of life on this planet, no matter the cost.
Françoise Ruscak is a French screenwriter. After initially graduating in bookbinding at Estienne, then in cinema at Paris-Diderot, she turned to screenwriting in 2009.

Since then, she has specialized in children's fiction and has worked on numerous episodes of French animated series, including Kaeloo (Canal +), Le Loup (TF1) and Les Blagues de Toto (M6).

In September 2020, she penned the script for Sirens & Vikings: The Scourge of the Abyss.

Laurent Genefort was born in 1968 in the Paris region. At the age of 20, he became the youngest author of the Fleuve Noir Anticipation collection with Le Bagne des ténèbres. After studying literature at the Sorbonne, Laurent Genefort devoted himself entirely to writing and in 1995 won the Grand Prix de l'Imaginaire for Arago. He is best-known for the immersive universe that he developed around the space opera Omale. Published for the first time in 2001, the novel is the first in a series of works telling the destinies of three species cohabiting on the planet Omale: the humans, the Chiles and the Hodgqins.

From 2008 to 2012, the writer directed the collection "Les Trésors de la SF" at Bragelonne. In 2017, he participated in the adaptation of his novel Les Peaux épaisses to the graphic novel medium: Thick Skins.