We Are Zombies (Paperback) 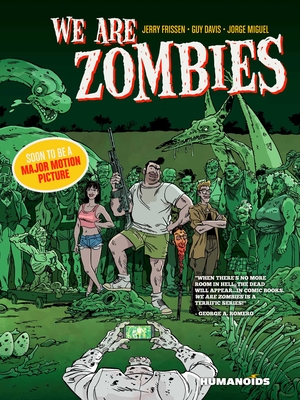 We Are Zombies (Paperback)


Coming Soon - Available for Pre-Order Now
Los Angeles, 2060s. In a world where humans have to coexist alongside the living dead, a new work opportunity arises: zombie pest control.

"When there's no more room in hell, the dead will appear...in comic books. We Are Zombies is a terrific series!" —George A. Romero (Night of the Living Dead, Dawn of the Dead)

Karl, his sister Maggie, and their Belgian friend Freddy Merckx, embrace this “career choice” in the hope of making some easy money. Not to mention enjoying the perks of the job, whether it’s bashing zombies or...er...sleeping with them. Unfortunately for our trio, the job isn’t that simple: not only are the dead still walking, but they stink, have a terrible sense of humor, and some very ambitious plans for world domination.
Jerry Frissen (born Thierry Frissen in Belgium) is an American comic book writer and toy & graphic designer. He is the senior graphic designer at Humanoids as well as the author of several best-selling graphic novels, including the anthology comic book series "Lucha Libre" ("Unfabulous Five," "The Tikitis"), "The Zombies That Ate The World" ("The Z Word") and the new cycle of the internationally acclaimed series "The Metabarons," co-written with Alejandro Jodorowsky and illustrated by Valentin Sécher, Niko Henrichon and Esad Ribic, under the title "The Metabaron." In addition to his work on "The Metabaron," Jerry Frissen is also the author of the forthcoming sci-fi thriller "Exo" (March 2018).

Self-taught Michigan-based artist Guy Davis had his first cartoon strip published in his hometown newspaper during high school. He teamed up with publisher Gary Reed and realized Baker Street, which featured an alternative Sherlock Holmes mythos where Victorian England is populated with punks. He contributed to many Caliber projects such as Sinergy, Book of the Tarot and Caliber Presents. Then he worked with Matt Wagner on the Sandman Mystery Theatre, which featured dreams of a grisly crime. More assignments from the major publishers followed, and Davis' credits include titles like Hellblazer, Batman for DC, Grendel, Aliens, Hellboy spinoff B.P.R.D. for Dark Horse and Fantastic Four: Unstable Molecules for Marvel. He continued his own comic The Marquis at Oni Press and drew The Zombies that Ate the World, written by Jerry Frissen for Humanoids. He has also created character sheets and chapter illustrations for White Wolf Games. Davis is a frequent collaborator of filmmaker Guillermo Del Toro.