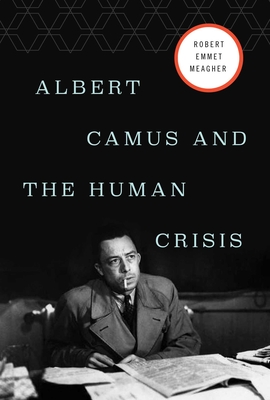 A renowned scholar investigates the "human crisis” that Albert Camus confronted in his world and in ours, producing a brilliant study of Camus’s life and influence for those readers who, in Camus's words, “cannot live without dialogue and friendship.”

As France—and all of the world—was emerging from the depths of World War II, Camus summed up what he saw as "the human crisis”:

We gasp for air among people who believe they are absolutely right, whether it be in their machines or their ideas. And for all who cannot live without dialogue and the friendship of other human beings, this silence is the end of the world.

In the years after he wrote these words, until his death fourteen years later, Camus labored to address this crisis, arguing for dialogue, understanding, clarity, and truth. When he sailed to New York, in March 1946—for his first and only visit to the United States—he found an ebullient nation celebrating victory. Camus warned against the common postwar complacency that took false comfort in the fact that Hitler was dead and the Third Reich had fallen. Yes, the serpentine beast was dead, but “we know perfectly well,” he argued, “that the venom is not gone, that each of us carries it in our own hearts.” All around him in the postwar world, Camus saw disheartening evidence of a global community revealing a heightened indifference to a number of societal ills. It is the same indifference to human suffering that we see all around, and within ourselves, today.

Camus’s voice speaks like few others to the heart of an affliction that infects our country and our world, a world divided against itself. His generation called him “the conscience of Europe.” That same voice speaks to us and our world today with a moral integrity and eloquence so sorely lacking in the public arena.

Few authors, sixty years after their deaths, have more avid readers, across more continents, than Albert Camus. Camus has never been a trend, a fad, or just a good read. He was always and still is a companion, a guide, a challenge, and a light in darkened times. This keenly insightful story of an intellectual is an ideal volume for those readers who are first discovering Camus, as well as a penetrating exploration of the author for all those who imagine they have already plumbed Camus’ depths—a supremely timely book on an author whose time has come once again.

Robert Emmet Meagher is Emeritus Professor of Humanities, Hampshire College, Amherst. His publishing career includes many books, translations, and original plays, most recently Herakles Gone Mad: Rethinking Heroism in an Age of Endless War and War and Moral Injury. For many years he has served in a range of veteran-focused programs aimed at understanding and healing soldiers with moral injury. He lives in East Hartland, Connecticut.

Praise for Albert Camus and the Human Crisis

“Meagher shows how considering the importance of our stories and the “language of common humanity”, which characterizes Camus’ life and work, is the response to the human crisis. The book focuses on Camus’ core ideas and takes us through all his work, offering insightful and moving readings of their meaning… [A] lovingly written and deeply moral book.”
— The Times Higher Education

"In Albert Camus and the Human Crisis, Meagher presents a powerful reading of the oeuvre of a thinker who still has much to tell us. Meagher’s deep understanding of Camus, developed over fifty years of teaching, enables him to discuss Camus’ work in prose that is lively and clear and, at the same time, full of nuance. Reading Meagher is like talking over coffee with your favorite professor. Berets and clove cigarettes optional."
— Chicago Review of Books

"This fascinating, multifaceted study of the weird and enduring social relevance of Camus is only a kind of biography on one of its many levels, but even so, it sheds more light on the inner man than many full-dress life studies have been."
— Steve Donoghue, Founding Editor of Open Letters Review

"Robert Meagher sheds light on Albert Camus’s 'enduring contribution to today’s challenges' in this brilliant study. Meagher argues strongly against the notion that Camus was an existentialist and an atheist, and makes a convincing case that a modern world in peril ought turn to 'the moral clarity and prophetic wisdom' of Camus. Fans of the philosopher and those new to his work will find this full of insight."
— Publishers Weekly

"Prophets are relentless.  Their voices defy death and the passage of time. In Robert Meagher’s book, the prophetic voice of Camus is powerfully resonant on every page. Camus warns us that our world is in crisis. Our common humanity is at stake. We daily harden ourselves against the suffering and death of others. We despair of dialog and prefer dominance. We eliminate people instead of problems. We accept everyday murder in our name, calling it just, deserved, or inevitable. In each chapter, Meagher mines the rare wisdom and decency in Camus’s words and works, confronting and challenging us to see ourselves in each other, to recognize our common humanity, to renounce killing and create community. Albert Camus and the Human Crisis is a moral field guide to surviving our lethal, dehumanizing times."
— Sr. Helen Prejean, CSJ: Celebrated author of Dead Man Walking; The Death of Innocents: An Eyewitness Account of Wrongful Executions; and River of Fire: On Becoming an Activist. Founder of Ministry Against the Death Penalty.

"An invaluable guide on the path to a fuller understanding of Moral Injury.”
— David Wood, Pulitzer Prize journalist and author of What Have We Done: The Moral Injury of Our Longest Wars

"This brilliant, timely, and compelling collection on the experience of war sheds urgently needed light on the moral 'wounds' of our combat veterans and how we, our society, and especially faith organizations can reach out to assist them in their time of need."
— John Scott, Major General (USA Retired), Deacon, Roman Catholic Church

"This book is a tremendous contribution to understanding moral injury, an impact of war largely unseen through ignorance or design. It should compel us individually and as nations to tackle mythologies contrived to glorify wars at the cost of the moral wellbeing of those sent to fight them.”
— Jody Williams, Nobel Peace Prize, Founding Coordinator, International Campaign to Ban Landmines

"War and Moral Injury is not only a work from the conscience, but from the heart. This earnest and moving collection gives us a much-needed view of what it is to be human in the face of war, of how we are not made to kill, and of how doing so injures the human soul. A stunning and essential book."
— Helen Benedict, Columbia University, author of Wolf Season, Sand Queen, and The Lonely Soldier