A Prince and a Spy: A Novel (Hardcover) 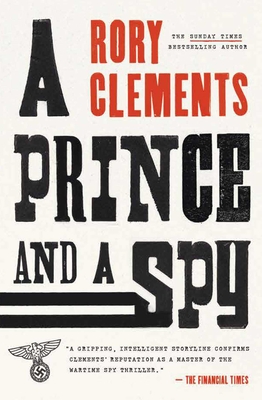 A Prince and a Spy: A Novel (Hardcover)


Usually Ships in 1-5 Days
A Cambridge spy must unravel a dangerous mystery that goes all the way to the heart of the Third Reich—and the British Monarchy—in this vivid new spy thriller from a London Times bestselling author.

Two old friends meeting in a remote castle in Sweden. They are cousins.

One is Prince George, brother of the king of England, and the other Prince Philipp von Hesse, a close friend of Adolf Hitler and a committed Nazi. Days later Prince George is killed in a plane crash and the country weeps, but not everyone believes that it was an accident.

When FDR, who happens to be a good friend of the prince, hears the tragic news, he wants to find out exactly what happened. The American OSS doesn’t believe the story that MI5 are pedalling. The situation is delicate. Professor Tom Wilde, Cambridge don, is called in to uncover the truth—but what he discovers is far more than he bargained for.
Rory Clements won the CWA Ellis Peters Historical Award in 2010 for his novel Revenger and the CWA Historical Dagger in 2018 for Nucleus. This is his first novel to be published in America. Rory lives in Dover, England. To receive exclusive news about Rory’s writing, go to www.roryclements.co.uk.
“Clements’ WWII thriller’s long but outstanding writing, riveting plot, vivid characters, taut suspense, and plenty of twists make it a five-star read. Part fact-based historical fiction, part spy thriller, and part high-octane adventure with a soupçon of romance, this outstanding tale will have wide appeal.”
— Booklist (starred)

“Rory Clements evokes the nervous, reckless build-up to the outbreak of war in a convincingly detailed thriller.”
— Daily Mail

“A standout historical novel and spy thriller by an author who can turn his hand to any historical period he chooses.”
— The Daily Express

"Enjoyable, bloody and brutish.”
— The Guardian