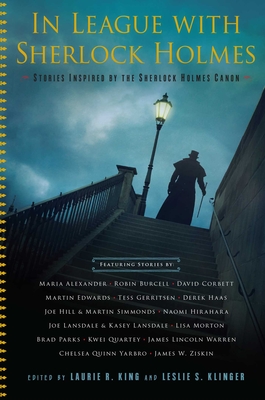 Sherlock Holmes has not only captivated readers for more than a century and a quarter, he has fascinated writers as well. Almost immediately, the detective’s genius, mastery, and heroism became the standard by which other creators measured their creations, and the friendship between Holmes and Dr. Watson served as a brilliant model for those who followed Doyle. Not only did the Holmes tales influence the mystery genre but also tales of science-fiction, adventure, and the supernatural. It is little wonder, then, that when the renowned Sherlockians Laurie R. King and Leslie S. Klinger invited their writer-friends and colleagues to be inspired by the Holmes canon, a cornucopia of stories sprang forth, with more than sixty of the greatest modern writers participating in four acclaimed anthologies.

Now, King and Klinger have invited another fifteen masters to become In League with Sherlock Holmes. The contributors to the pair’s next volume, due out in December 2020, include award-winning authors of horror, thrillers, mysteries, westerns, and science-fiction, all bound together in admiration and affection for the original stories. Past tales have spanned the Victorian era, World War I, World War II, the post-war era, and contemporary America and England. They have featured familiar figures from literature and history, children, master sleuths, official police, unassuming amateurs, unlikely protagonists, even ghosts and robots. Some were new tales about Holmes and Watson; others were about people from Holmes’s world or admirers of Holmes and his methods. The resulting stories are funny, haunting, thrilling, and surprising. All are unforgettable. The new collection promises more of the same!

Laurie R. King is the New York Times bestselling author of numerous books, including the Mary Russell and Sherlock Holmes stories. She has been nominated for a multitude of prizes, and her fiction has won the Edgar, Creasy, Nero, Macavity, and Lambda Awards. She has been guest of honor at several crime conventions and is probably the only writer to have both an Edgar Award and an honorary doctorate in theology. She was inducted into the Baker Street Irregulars in 2010.

"Introducing their fifth ever more wide-ranging collection, the editors indicate the principal originality of this one: The authors are all “not previously known to be friends of Holmes.” This promise is paid off in spades. The entries that flaunt their cleverness and update or deconstruct Holmes in ingenious ways."
— Kirkus Reviews

"Just as all of the writers involved have their own takes on Holmes, so will anyone who picks up this book.  And anyone fascinated by the interplay of Holmes and Watson - logic and emotion, intuition and science, detection and storytelling, or anything else in these everlasting archetypes - definitely should."
— Los Angeles Times

"You will be squirming in your seat in a fit of pure delight as you turn each page of this anthology."
— BookReporter