Love, If That's What It Is (Paperback) 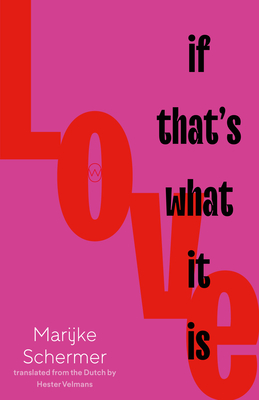 Love, If That's What It Is (Paperback)

For fans of Marriage Story and Elena Ferrante's Days of Abandonment

Terri runs off with a lover, abandoning her children and her marriage of twenty-five years. Her husband, David, is left to take care of their two daughters, one of whom is falling in love for the first time. These four people start to question their identity outside the nuclear family. What remains of a disintegrated home, and what changes? Marijke Schermer's Love, If That's What It Is gives a kaleidoscopic view of a divorce, permitting the reader to enter the heads of not only the spouses, but also of the two daughters and the divorcees' new lovers. Through several characters, the reader is presented with just as many views on relationships, while Schermer remains impartial and thus confronts readers with their own--perhaps shaky--romantic principles. What is love? With fresh flair and provocative perspectives, Schermer manages to provide an original and versatile answer.

Marijke Schermer is a novelist and playwright. Her stage work has been performed by several companies and translated into various languages. Her novel Noodweer ("Severe Weather") was shortlisted for the ECI Literature Prize in 2017 and subsequently sold to Spain, Switzerland, and Denmark. In 2019, her novel Love, If That's What It Is was published in Dutch and Schermer was hailed as "fast becoming one of the most interesting writers in the Netherlands." Love, If That's What It Is was shortlisted for the prestigious Libris Literature Prize 2020 and is her first work to be published in English. HESTER VELMANS was born in Amsterdam, but lived in five different countries while growing up, before finally settling in western Massachusetts. She is the author of the popular children's books Isabel of the Whales and Jessaloup's Song. The recipient of an NEA Translation Fellowship in 2014, she was previously awarded the Vondel Prize for her translation of Renate Dorrestein's A Heart of Stone. Her most recent novel, Slipper, was published in April 2018.