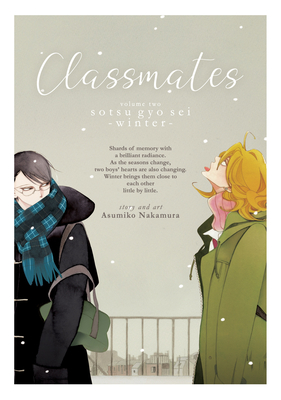 This is book number 2 in the Classmates: Dou kyu sei series.

SHELTER FROM THE COLD Though Rihito’s always been a loner, lately he’s grown close to his classmate, Hikaru. The two of them have even fallen in love and tentatively started dating. But when Rihito’s mother ends up in the hospital, the stress of it all becomes too much for him. Hikaru wants to be there for Rihito, but can Rihito learn to open his heart and rely on another person?
Asumiko Nakamura is an acclaimed manga creator known in English for Utsubora: The Story of a Novelist and her contribution to the Neo Parasyte f anthology, but she's best known for her Boy's Love stories, especially Classmates.