Northeaster: A Story of Courage and Survival in the Blizzard of 1952 (Hardcover) 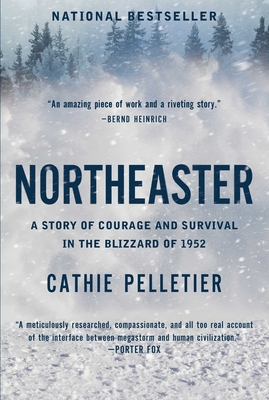 Northeaster: A Story of Courage and Survival in the Blizzard of 1952 (Hardcover)


Usually Ships in 1-5 Days
A vivid and gripping story of an epic Maine snowstorm that tested the very limits of human endurance.

For many, the past few years have been defined by climate disaster. Stories about once-in-a-lifetime hurricanes, floods, fires, droughts and even snowstorms are now commonplace. But dramatic weather events are not new and Northeaster, Cathie Pelletier’s breathtaking account of the 1952 snowstorm that blanketed New England, offers a valuable reminder about nature’s capacity for destruction as well as insight into the human instinct for preservation.

Northeaster weaves together a rich cast of characters whose lives were uprooted and endangeredby the storm. Housewives and lobstermen, loggers and soldiers were all trapped as snow piled in drifts twenty feet high. The storm smothered hundreds of travelers in their cars, covered entire towns, and broke ships in half. In the midst of the blizzard’s chaos, there were remarkable acts of heroism and courageous generosities. Doctors braved the storm to help deliver babies. Ordinary people kept their wits while buried in their cars, and others made their way out of forests to find kind-hearted strangers willing to take them in.

It’s likely that none of us know how we would handle a confrontation with a blizzard or other natural disaster. But Northeaster shows that we have it inside to fight for survival in some of the harshest conditions that nature has to offer.

Cathie Pelletier was born and raised on the banks of the St. John River, at the end of the road in Northern Maine. She is the author of twelve  novels, including The Funeral Makers (a New York Times Notable Book), The Weight of Winter (winner of the New England Book Award) and Running the Bulls (winner of the Paterson Prize for Fiction). As K. C. McKinnon, she has written two novels, both of which became television films. After years of living in Nashville, Tennessee Toronto, Canada and Eastman, Quebec, she has returned to Allagash, Maine and the family homestead where she was born.
“Cathie Pelletier anatomizes this two-day tempest in Northeaster, a historical re-creation of personal experiences so dramatic that they have lingered for decades in local and family lore. It’s touching to see the faces of real people who went through the ordeal.”
— The Wall Street Journal

"Northeaster is a meticulously researched, compassionate, and all too real account of the interface between megastorm and human civilization, a tragedy that is too often reduced to numbers and statistics. Set in America's last frontierland, the state of Maine, Cathie Pelletier cracks open the door to victims's lives before the storm and the immeasurable loss they suffered after it."
— Porter Fox, author of

"Northeaster is an amazing piece of work, giving us a riveting story. The storm is the framework, but the picture it holds is of the characters themselves, how they lived their lives, how they faced adversity. Incredibly, not only can this scenario happen again. One day it will."
— Bernd Heinrich, author of Ravens in Winter and The Snoring Bird

"If there’s a snowier book than Northeaster, I don’t know it. With its rich cast of fishermen, woodsmen, millworkers and plain old small-town Mainers, Cathie Pelletier’s dramatic re-creation of the great blizzard of ‘52 isn’t simply a fast-paced disaster narrative about the workings of fate, but a paean to a long-lost way of life."
— Stewart O’Nan, author of The Circus Fire