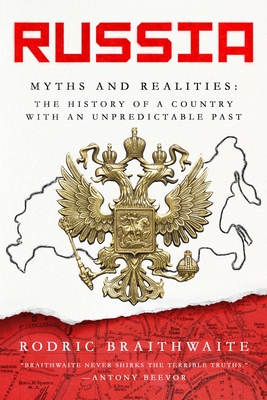 
Usually Ships in 1-5 Days
An expert historian and former ambassador to Moscow unlocks fact from fiction to reveal what lies at the root of the Russian story.

Churchill remarked that Russia is a riddle wrapped in a mystery inside an enigma. That has become an excuse for intellectual laziness. Russia is not all that different from anywhere else. But you have to disentangle the facts from the myths created both by the Russians themselves and by those who dislike them.

In this dynamic new history, Rodric Braithwaite—Russia expert and former ambassador to Moscow—does exactly that, unpicking fact from fiction to discover what lies at the root of the Russian story.

Russia is the largest country in the world, with the largest arsenal of nuclear weapons. Over a thousand years this multifaceted nation of shifting borders has been known as Rus, Muscovy, the Russian Empire, and the Soviet Union. Thirty years ago it was reinvented as the Russian Federation. Like the rest of us, the Russians constantly rewrite their history. They, too, omit episodes of national disgrace in favor of patriotic anecdotes, sometimes more rooted in myth than reality.

Russia is not an enigma, but its past is violent, tragic, sometimes glorious, and always complicated.
Sir Rodric Braithwaite was British Ambassador to Moscow during the crucial end of the Cold War (1988-92). Subsequently he was foreign policy advisor to British Prime Minister John Major. His previous books include the highly praised Moscow 1941 (Knopf) and Afgantsy (Oxford University Press).  He lives in England.
"[Russia: Myths and Realities] illuminates the deep historical wellsprings of Putin’s war on Ukraine and the accompanying crackdown in Russia itself."
— Washington Post

“An intriguing new history of the largest nation on Earth. There is no shortage of histories, but this one is a useful addition to the shelves…An expert account of Russia through sympathetic—if not optimistic—eyes.”
— Kirkus

“Having served as Britain’s ambassador to Moscow between 1988-92, Braithwaite witnessed first-hand the Russian fall from greatness that Putin is now trying to resurrect. He is an engaging guide, though, to the entire past Russian millennium –– and writes with the same flair demonstrated in his previous bestseller Afghantsy, about the disastrous Soviet Afghan campaign.”
— The Telegraph

"Braithwaite authoritatively describes the following century, during which very little went right, from the revolution to Stalin. At the expense of unspeakable suffering, much of it unnecessary, Stalin strengthened the Soviets enough to fend off Hitler’s invasion in 1945. Victory was glorious, but the economy remained dysfunctional. As the author notes, “Russian history for the next four decades was a story of inadequate attempts to fix the system.” Many Russians cheered the Soviet Union’s collapse, but there followed a decade of misery before another autocrat took over. Putin’s vision to regain superpower status requires winning wars. Braithwaite emphasizes that this is a risky tactic, and he warns that, despite our hopes, no one knows how his efforts will turn out.

An expert account of Russia through sympathetic—if not optimistic—eyes."
— Kirkus Reviews

"In this concise survey of the turning points that shaped Russia’s national identity, historian Braithwaite (Moscow 1941) tracks the country’s torturous evolution from a “collection of princely domains bound by loyalty to the Grand Prince of Kiev” to an imperial powerhouse in the 18th and 19th centuries, then a collapsed and incoherent nation returned, in the view of many Russians, “to something like its rightful place in the world” by Vladimir Putin. Enlivened by Braithwaite’s pointed pronouncements (“It is difficult to like Peter [the Great] as a man, but hard not to be amazed by him as a phenomenon”), this is a brisk and immersive introduction to Russian history."
— Publishers Weekly

“Rodric Braithwaite's Russia is a scholarly yet highly readable gallop through the last 1,000 years of Russian history. As befits a distinguished former diplomat, Braithwaite is judiciously opinionated. To understand this tormented nation better––and thereby how Putin came to launch his catastrophic invasion of Ukraine––you can do no better than read this illuminating portrait.”
— Jonathan Dimbleby, historian and author of Barbarossa