Hands Down: A Novel (A Dick Francis Novel) (Hardcover) 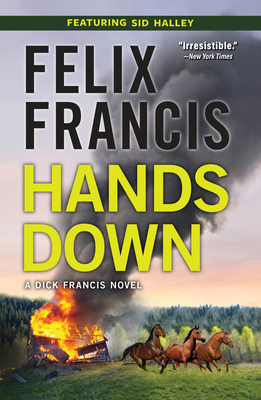 Hands Down: A Novel (A Dick Francis Novel) (Hardcover)


Usually Ships in 1-5 Days
“The master of suspense and intrigue” (Country Life) is back with the next powerful installation in the Dick Francis series, featuring Sid Halley, perfect for fans of Harlan Coben and Michael Connelly.

Sid Halley, a private investigator, has a new left hand, having had a transplant since his last appearance in Refusal. After receiving death threats, an ex-jockey trainer friend calls Sid to ask for his help, but Sid has his own problems to deal with; like recovering from surgery and saving his crumbling marriage.

When his friend’s stable yard is torched, horses killed, and the friend is found dead, Sid can only blame himself for not helping sooner. The police think it’s suicide, but Sid is not convinced after his friend’s terrified phone calls. Heavy with a guilty heart, Sid starts to investigate and soon finds himself embroiled in a conspiracy that cuts to the very heart of the integrity of British horse racing.


Can Sid figure out what happened to his friend, or will he be the next one that the killer targets?
The New York Times, The London Sunday Times and International bestseller, acclaimed author, Felix Francis, was born in Oxford, England, son of the famous mystery author, Dick Francis and his wife, Mary Francis. Felix graduated from London University. His initial career led him into physics, where he was a successful teacher of A Level Physics. But he could not deny that his family’s gift of writing had been passed along to him, and he started his second career—as an author—where he found his knowledge of physics was a great advantage. His many other accomplishments include being an expert outdoorsman, marksman and pilot. Felix Francis resides in England with his wife, Debbie, their family and two Irish Setters and a Cavapoo.
Praise for Hands Down:
“Excellent . . . Francis nicely balances his lead’s personal challenges with his sleuthing.”
—Publishers Weekly, starred review

“One of the most compelling figures in crime fiction.”
—Booklist, starred review

“As fascinating as ever.”
—Kirkus Reviews

Praise for Iced:
“Brilliant all around.”
—Booklist, starred review

“Wonderfully evocative...riveting throughout. Exciting at every turn.”
—Booklist, starred review on Pulse

“Another trip to the winner’s circle for the talented Francis.”
—Booklist, starred review on Crisis

"Francis devises a subtle, clever scheme for the heart of the mystery, and he excels at making his broken lead credible and sympathetic.”
—Publishers Weekly, on Pulse