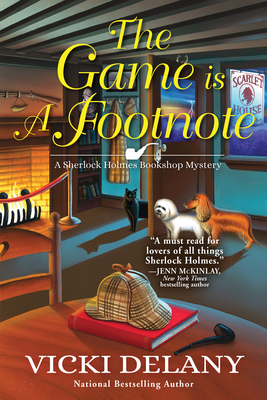 This is book number 8 in the A Sherlock Holmes Bookshop Mystery series.

Gemma Doyle and Jayne Wilson are back on the case when a body is discovered in a haunted museum in bestselling author Vicki Delany's eighth Sherlock Holmes Bookshop mystery.

Scarlet House, now a historical re-enactment museum, is the oldest building in West London, Massachusetts. When things start moving around on their own, board members suggest that Gemma Doyle, owner of the Sherlock Holmes Bookshop and Emporium, might be able to get to the bottom of it.  Gemma doesn’t believe in ghosts, but she agrees to ‘eliminate the impossible’. But when Gemma and Jayne stumble across a dead body on the property, they’re forced to consider an all too physical threat.

Gemma and Jayne suspect foul play as they start to uncover more secrets about the museum. With the museum being a revolving door for potential killers, they have plenty of options for who might be the actual culprit.

Despite Gemma's determination not to get further involved, it would appear that once again, and much to the displeasure of Detective Ryan Ashburton, the game is afoot.

Will Gemma and Jayne be able to solve the mystery behind the haunted museum, or will they be the next to haunt it?
Vicki Delany is a bestselling author of more than thirty novels/novellas in several of mystery's subgenres. Born in Manitoba and raised in Ontario, she is the former president of the Crime Writers of Canada, a member of Capital Crime Writers, and a member of Sisters in Crime.
Praise for The Game is a Footnote:
“Will please Sherlockians . . . [An] inventive plot.”
—Publishers Weekly

“Sherlock Holmes’ methods work once more in a charming combination of history and mystery.”
—Kirkus Reviews

Praise for the Sherlock Holmes Bookshop Mysteries:
"A must read for lovers of all things Sherlock Holmes."
—Jenn McKinlay, NYT and USA Today bestselling author

"Vicki Delany is one of my favorite mystery authors and with Elementary, She Read, she has outdone herself."
—Kate Carlisle, New York Times bestselling author

"Cheers for a charming, intelligent heroine as observant as The Great Detective himself.”
—Carolyn Hart, New York Times bestselling author

“Thoroughly delightful. I defy anyone to read this book and not fall in love with the uber-observant Gemma Doyle."
—Laura DiSilverio, bestselling author

“Huzzah for Vicki Delany who’s created vivid characters, a setting that will whet the appetite of mystery readers, and a who-dun-it well worth investigating.”
—Kylie Logan, nationally bestselling author

"A treat for Holmes fans with plenty of twists and turns in the best Sherlock-ian style."
—Kirkus Reviews

“Gemma is a delightful sleuth, and the tidbits of Sherlockiana will engage both cozy fans and Holmes devotees.”
—Booklist

“Suggest for fans who enjoy humor in the Sherlock Holmes pastiches or readers of Carolyn Hart’s ‘Death on Demand’ mysteries.”
—Library Journal